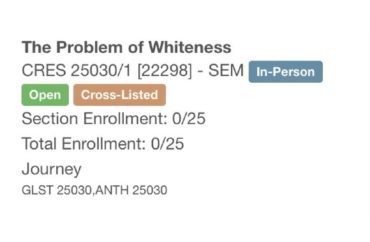 Instructor moved the course to the spring after public attention

University of Chicago will offer a course titled “The Problem of Whiteness” this upcoming spring semester.

The class is offered through the Critical Race and Ethnic Studies Department and has attracted media attention.

“This seminar examines the problem of whiteness through an anthropological lens, drawing from classic and contemporary works of critical race theory,” according to the course description.

The university declined to provide a copy of the syllabus.

Associate Director for Public Affairs Gerald McSwiggan told The College Fix via email that the school was “committed to upholding the values of academic freedom, the free expression of ideas, and the ability of faculty and students to express a wide range of views and to contest the ideas that they oppose.”

“The instructor for the course has chosen to move the offering to Spring Quarter,” McSwiggan told The Fix.

He would not provide any materials related to the course nor respond to arguments from some that the class is discriminatory toward white students.

The course labels ‘‘whiteness” as an “unmarked racial category.”

“Critical race theorists have shown that whiteness has long functioned as an ‘unmarked’ racial category, saturating a default surround against which non-white or ‘not quite’ others appear as aberrant,” according to the course description

The Fix reached out to course instructor Rebecca Journey to ask how she defined “whiteness” and what she hoped to achieve by teaching the class.

Journey did not respond to two requests for comment sent in the last week. She received her doctorate from the university in 2021 and is a social sciences teaching fellow, according to her bio.

The University of Chicago student who first tweeted about the course offering told The Fix that this was the worst case of “anti-white hatred” that he had seen at the university.

“Since I began college a year ago, I have documented on my Twitter all the anti-white hatred I have seen on campus. Without a doubt, this is the most egregious example,” conservative activist Daniel Schmidt told The Fix.

He questioned the objective of the course in his comments to The Fix.

“This is exterminationist language,” he said. “What could be the solution to the “problem of whiteness?”

“The effort to treat white students as subhuman is so blatant that denying it is denying reality,” he said.

As Black Lives Matter likes to say, “Silence is violence.” Can you fathom the amount of outrage if a course called “The Problem of Blackness” were taught? Why aren’t white students similarly outraged? Enough is enough. Things will become far worse unless students at every university call out anti-white hatred every time they see it. The word “anti-white” must be normalized and an unavoidable concern for all political leaders. Right now, only a handful of people are talking about it. That needs to change.

After Schmidt tweeted about the university offering the class, a course information page was updated showing that the class had been canceled, but it has since been rescheduled.