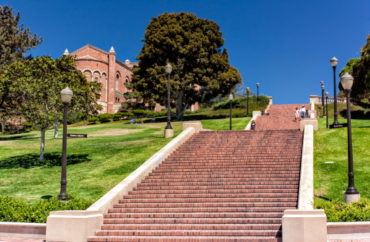 The UCLA College Republicans have a message for students who claim a popular meeting place on campus promotes racism: Stop trying to erase history.

The group called student and community activists “cultural parasites” for campaigning to rename the Janss Steps, named after a pair of brothers recently accused of racism for practices nearly a century ago.

Those who want the steps renamed “feed off the accomplishments of the adventurous and the great,” trashing the legacy that enabled UCLA to become “a world-class institution in the process,” the CRs wrote in a Facebook post.

“Students are weaponizing the atmosphere of cancel culture,” the College Republicans added in an email to The College Fix.

More than 20 student groups supported a recent student government resolution to rename the Janss Steps after the Tongva tribe, which was indigenous to the area.

The student government passed the resolution unanimously on July 28, according to the Daily Bruin. A petition to rename the Janss Steps reached nearly 3,500 signatures in two months, though it didn’t recommend another name for the campus location.

“UCLA is one of the only appropriate places where the Tongva people can be honored on their own land,” Melody Satele, a student government leader who spearheaded the effort, told The College Fix in an email.

The next step is to take a formal proposal to the administration, she said.

The university did not respond to several email requests for comment in the past week from The Fix, but it told the Daily Bruin that it is reviewing the petition and committed to maintaining an inclusive campus.

“We are committed to UCLA’s values of equity, diversity and inclusion, and are considering ways to better align the names of campus structures and spaces with those values, as well as to honor the contributions of people from a variety of backgrounds,” a university spokesperson said.

The Janss brothers invested and developed real estate in the region and sold land to UCLA at a discounted rate so it could build the university.

However, some members of the Janss Investment Company sold land with racial covenants that barred African-Americans from buying the land. The company won a 1925 state court case that allowed it to include racial covenants in lot sales. It also denied an offer from an Asian-American sorority to buy a house from the company in 1938, according to the Daily Bruin.

But the UCLA College Republicans see the campaign against the Janss Steps as a continuation of growing intolerance on campus.

“Months ago, a mob was stirred up to fire Professor Klein over nothing more than a response to a student’s email,” the CRs told The Fix, referring to a professor targeted for firing because he questioned a student’s request for race-based grading.

“Today, they are attacking historical sites on campus foundational to UCLA’s history” as part of “the nationwide movements to destroy and erase American history,” the College Republicans continued.

The College Republicans’ Facebook statement accused UCLA students of “pay[ing] reverence to their deity of equality” by demanding the renaming of the steps:

But equality is not an inherent virtue outside of our legal system. UCLA for the past 100 years has advanced our technological understanding of the world and served as an institution to further the betterment of humanity. The Janss brothers shared the vision that UCLA has grown into and sold the land the university is built on at a highly discounted price.

The statement also criticized the Tongva people for claiming a stake to the land. They are trying to “delegitimize UCLA by excoriating them for building on so-called ‘stolen ground,’” when UCLA’s only obligation to the tribe is to “recognize the historical fact that they lived in the LA region.”

The creator of the renaming petition emphasized to The Fix that he didn’t suggest the Tonvga people as the replacement, and his aim was not “cancelling the Janss brothers.”

UCLA graduate Michael Penny wrote in an email that he wanted “to bring attention to their [Janss brothers] racist legacy because as an alumnus I don’t want the people who excluded People of Color from Westwood to be honored on our campus.”

Penny’s larger goal is to call attention to the national practices of housing discrimination. He said he wants people who have signed the petition to understand the scope of the issue instead of “stopping at finding a villain.”

The descendants of Edwin and Harold Janss have acknowledged and rejected the company’s racist past, using the family foundation to fund numerous charitable organizations, Penny noted.

But the College Republicans are not convinced student activists will stop at the “villain” of the Janns brothers.

“The mob will never be satiated,” the College Republicans told The Fix.

“To these students, history is meaningless and stands for nothing. There will be no honest conversation about the Janss brothers, only that they are ‘hateful’ and the name must be changed,” the CRs said.