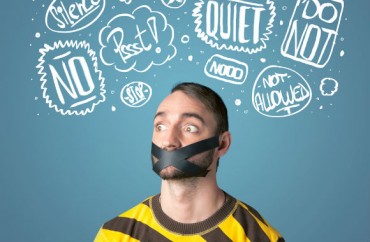 It’s just ‘guidelines’ and it’s based on ‘research’

Nobody at the University of California will be punished for saying “America is the land of opportunity” or asking a foreign-looking student “where are you from?”

That was the repeated claim by a UC-Irvine professor during a heated discussion about microaggressions at the campus Tuesday night, moderated by Southern California Public Radio.

The impetus for the event was UC’s “training sessions” in the previous academic year, in which deans and department chairs were instructed not to use certain words or phrases that could offend minority populations.

The university system wanted to raise awareness that “things that we say can be misinterpreted,” but it’s not prohibiting speech, said Doug Haynes, who teaches history. “You might want to think about the context of what you’re asking,” and ask for a person’s background in such a way that “doesn’t apply any kind of hierarchy” to them.

Seated next to each other on stage, it was the first of many feuds between the two.

Because “higher education is a relatively privileged area,” asking a first-generation college student for their background “might imply that they don’t belong to the institution,” Haynes said.

Lukianoff said he was exactly that first-generation college student and felt patronized by how his alma mater told students to address poor kids like him.

“Being offended is what happens when you have your deepest beliefs challenged” and it should happen at every college, Lukianoff said. Colleges would be less likely to punish faculty for using a racial slur in a pedagogical context, as Brandeis University did, if they simply gave people “the benefit of the doubt.”

“You’re painting the picture of a dark night settling over higher education,” Haynes told Lukianoff, rather than recognizing colleges should talk about “implicit bias.” Asked by moderator Larry Mantle whether he would allow a Southern student to defend the Confederate flag in class, Haynes said that’s fine as long as it’s grounded “in a scholarly debate.” Yet the UC list of microaggressions is literally telling faculty leaders that “it’s a tiny form of violence” to say “America is the land of opportunity,” and it’s undoubtedly school policy, Lukianoff said. No, it’s a “set of guidelines that are open for people to accept or not,” Haynes replied. “It’s grounded in [academic] research.”

The words on UC’s list are only offensive in certain contexts – say, when “it may be interpreted” that a person is being told to assimilate, Haynes said. It’s not fair to imply to someone “you’re insufficiently American.”

Moving back toward a violent ‘honor society’

Bradley Campbell, a sociology professor at California State University-Los Angeles, said the concept of microaggressions is a step back toward “honor societies” in which personal slights must be answered with violence. They still exist in some inner-city areas, he said.

The co-author of a paper that argues “victimhood” is a new badge of honor on campus, Campbell said the 1960s civil rights movement helped usher in a “culture of dignity” that doesn’t answer insults tit for tat.

“Moral change is afoot” with microaggressions now, Campbell said, and “I don’t see how that’s good” if students learn from campus administrators they have to walk on eggshells.

RELATED: Being a ‘victim’ has become a badge of honor on campus, sociologists argue

Even jokes between friends can be microaggressions, said UC-Irvine’s Tanya Sanabria, a graduate instructor of sociology.

Sharing an incident where a female friend used the phrase “silence means consent” as a joke, Sanabria said she confronted the friend about making light of sexual assault, but “she brushed it off.”

Moderator Mantle asked, “was it wrong for her to test that out” and see if Sanabria was amused? Sanabria said her friend should have known better.

Calling out microaggressions like sexual harassment is about “challenging the status quo,” Sanabria said. Pressed by Mantle as to whether all women see the same things as harassment, Sanabria said such a discussion requires a “safe space.”

Women are “taught to fear men,” so it’s uncomfortable for women to call out microaggressions, Sanabria said. The onus shouldn’t be on her – “the sexual harasser shouldn’t be harassing me in the first place.”

Let friends tease each other, and keep the professor out of it

Comedian Chris Rock’s explanation of why he stopped performing on college campuses is disingenuous, said comedian Alonzo Bodden, who won the third season of NBC’s Last Comic Standing: Younger comics are simply “closer to the culture of the students.”

“Invariably it’s that group of administrators that make the rules that might be offended” by his act, said Bodden: “Very rarely” have students complained that he was offensive.

Bodden said that students who say patently offensive things never got “a punch in the mouth” as kids for what they said. But friends can joke amongst themselves about being broke or rich, he added, noting his Bronx and Brooklyn friends teased him about being from “the suburbs” in Queens.

That’s not the same as a first-generation student seeking a “Compton cookout poster” or blackface clip on YouTube, sociology professor Haynes interjected. Bodden was skeptical that students would do that so brazenly, but said it was only important if a professor did it to a student, because “a professor comes from a point of power.”

Only one view of ‘Islamic terrorism’ allowed?

Asked during the question-and-answer portion whether the debate has been wrongly framed as speech versus “feelings,” Haynes reiterated that UC’s microaggressions list is just “guidelines.” Lost in the “static” of the debate is that students deserve “an environment where they can thrive,” he said.

Students are learning how to shut down arguments they don’t like, countered Lukianoff: “You’re training them to be anxious and miserable” their whole lives.

Asked by a student why Americans should tolerate their tax dollars going to universities that suppress language on subjects like “Islamic terrorism,” Haynes said students can say almost anything they want on campus but UC has “expectations” for them. “That doesn’t stifle your First Amendment rights.”

Sanabria asked the student questioner why he needed to use “derogatory language to make your point” about Islamic terrorism. Haynes told the student to “get educated” on the history of Islam in a UC-Irvine class.

Challenged by Mantle on whether he was saying there’s only one acceptable view on Islam, and it’s found in his classroom, Haynes said students need to be “informed” with context and “documents.” Students can’t complain if they call Islam a violent religion and then others call them racists, Bodden added.

Bodden tried to get everyone to agree that they can dismiss “the ridiculous applications” of microaggressions, as Lukianoff shared, but not the concept itself.

CORRECTION: Greg Lukianoff’s alma mater is not the University of New Hampshire, as originally stated. The article has been amended to reflect this.