A course on dark-skinned female deities has put a Hindu advocacy group out of the holiday mood because of its alleged treatment of the Hindu goddess Kali.

Rajan Zed, the Nevada-based president of the Universal Society of Hinduism, claims that he wrote the University of California-Santa Barbara on several occasions, requesting details on the course “Dark Goddesses and Black Madonnas.”

The public university confirmed to The College Fix that it’s refusing to turn over the syllabus, claiming that it’s “proprietary” and not covered by public-records laws.

UCSB’s rationale does not pass muster with public-records expert Frank LoMonte, director of the Brechner Center for Freedom of Information at the University of Florida.

“‘Proprietary’ should never be a legal excuse for refusing to grant a request for public records,” he told The Fix in an email. But LoMonte also conceded that “the courts are in confusion over this issue” across the country, including in California.

Only two states are known to have decisively settled the status of syllabi as government records: Missouri and Minnesota. They reached opposition conclusions.

According to the online course description, “Dark Goddesses and Black Madonnas” explores “female deities and apparitions of the Virgin Mary historically depicted as dark-skinned.”

Offered this fall, the course places “particular emphasis on the role color has played in defining their attributes, relationships with religious practitioners, and ethnic or racial identities,” the description continues.

But while the course touches on the Catholic apparition of Guadalupe, Mexico, and the famous Black Madonna of Czestochowa, Poland, the section on the course covering the Hindu goddess Kali is what upset Zed’s group. 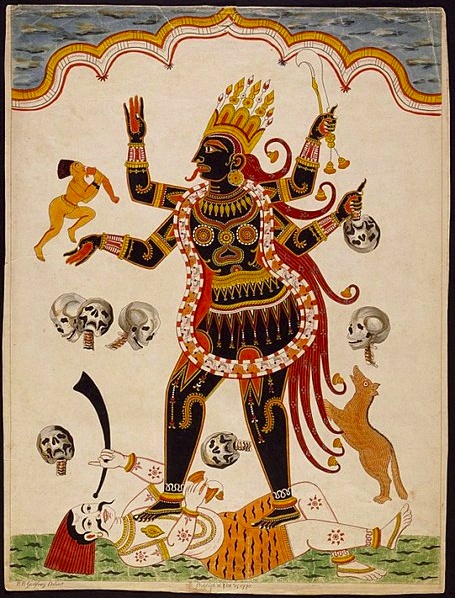 In an email to The Fix last month, Zed claimed that the religious studies department’s Twitter account described Kali (left) as “wild, violent, and sensual.” A search by The Fix through the department’s feed could not find the referenced tweet, however.

Zed blasted UCSB for “suppressing information” about the course in response to his efforts to see a “detailed curriculum.”

He claimed to have reached out to the religion professor who teaches the course, Elizabeth Pérez; Chancellor Henry Yang; and several deans, among others. The only person who gave him an answer was Fabio Rambelli, chair of the religious studies department, who refused Zed on the grounds that “our syllabi are proprietary materials.”

Zed declined to share his correspondence with university officials or point to the tweet when asked by The Fix.

“Trivializing a highly revered Hindu deity and then refusing to divulge what was being taught in the course was highly inappropriate for a public university like UCSB,” he wrote in the initial email. Hinduism “should not be taken frivolously,” and symbols of any faith “should not be mishandled.”

Neither Pérez, the course instructor, nor teaching assistant William Chavez responded to Fix queries asking for a copy of the syllabus.

The administration told The Fix before Thanksgiving that it would forward the request for the syllabus to the “appropriate representative.” It provided a statement the following week:

As religious studies department chair Fabio Rambelli told Rajan Zed in responding that the material could not be provided to him, “Our syllabi are proprietary materials, and we share them only with students regularly enrolled in our classes and with colleagues at the discretion of the instructors.”

The Brechner Center’s LoMonte, who led the Student Press Law Center for nearly a decade, mocked the public university’s stated reason for hiding the syllabus.

“Just about everything is theoretically protected by copyright, including letters and emails, but the fact that something is subject to copyright doesn’t mean it’s not also a public record,” he wrote in an email:

The fact that a document has some proprietary value doesn’t mean it can’t be produced to a requester, it just means that the requester could be sued for commercially exploiting that document. …

[I]t’s just wrong to say that the proprietary value of a syllabus makes it a secret. In fact, many universities routinely publish syllabi online, and no professor that I know restricts students in how they use the syllabus, as you’d do if the document was really a valuable piece of commercial property.

The courts haven’t offered much help on this subject, though, LoMonte continued. Several years ago the National Center on Teacher Quality won on appeal in Minnesota, and lost on appeal in Missouri, in response to its legal efforts to obtain syllabi nationwide.

To his knowledge “the open-records status of a syllabus hasn’t reached the California Supreme Court,” LoMonte said.

UC-Berkeley’s Claudia Polsky wrote critically about the use of open-records requests for “political harassment” of professors, in a forthcoming paper for the UCLA Law Review.

The law professor told The Fix in an email she hadn’t heard about Zed’s “fascinating” case and asked to see his request and UCSB’s denial, since both are “obviously” public records.

Told that UCSB confirmed why it rejected Zed’s request but did not share his formal request or the university’s formal response, Polsky said it would be “professionally irresponsible” for her to comment on whether UCSB’s denial violated the California Public Records Act. UCSB did not immediately respond to a Fix request for those two documents Monday.

UCLA law professor Eugene Volokh told The Fix he couldn’t speak on the issue because it’s outside his specialty of First Amendment law. But he noted that even faculty at public universities are generally allowed to teach courses in whatever way they wish.

He recommended contacting the First Amendment Coalition, which has more expertise on California public records law. The coalition did not return a message The Fix left with a receptionist.