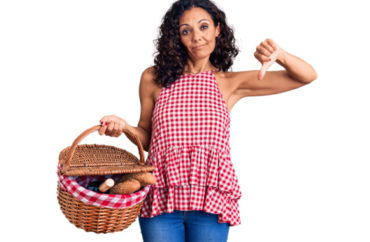 “Crack the whip.” “Master/slave.” Even the term “picnic” has been deemed offensive, according to a lengthy list of words and phrases put out recently by the University of Michigan’s Information and Technology Services’ “Words Matter Task Force.”

“To effectively communicate with customers, it is important for ITS to evaluate the terms and language conventions that may hinder effective communication, harm morale, and deliberately or inadvertently exclude people from feeling accepted to foment a healthy and inclusive culture,” states the memorandum obtained by The College Fix.

The memo, last updated December 8, contains nearly 36 recommendations for alternative words and phrases, the naming of artifacts, cultural development within the organization, the creation of an advisory board, and a list of “next steps.”

A centerpiece of the memo is the first of four appendices, a table of terms deemed offensive and alternatives to replace them.

The list includes the word “picnic” under the offensive column. It suggests using “gathering” instead.

The University of Michigan media relations department declined to comment at this time on questions from The College Fix on the list and what would happen to employees who refused to abide by the guidelines in the memo.

The University of Michigan’s Information and Technology Services leadership also did not respond to a request for comment from The Fix on whether the list could be seen as a form of policing language. 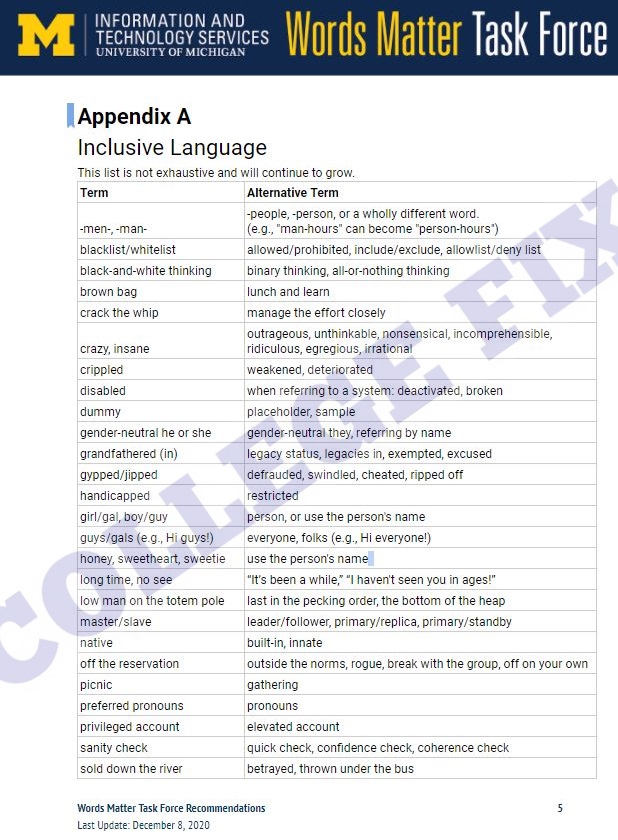 An internet search on the issue of the word “picnic” being racist includes a Reuters article from July 2020 headlined: “Fact check: The word picnic does not originate from racist lynchings.”

As for the rest of the list, it contains several words containing a variation on the word “man,” such as “spokesman” or “chairman.” The guide recommends using terms like “spokesperson or “chairperson” instead.

Instead of using “crazy,” “dummy,” or “sanity check,” the list encourages “unthinkable,” “placeholder,” and “coherence check,” respectively, lest the speaker offend those with mental illnesses.

Terms that might offend those with disabilities such as “crippled” and “handicapped” are replaced with “weakened” and “restricted.”

The feelings of Native Americans are also taken into account. Information and Technology Services’ employees should not use the phrase “off the reservation” and are encouraged to replace it with “outside the norms” or “rogue.”

The phrase “grandfathered in” also made the cut. The College Fix previously reported on a professor who also claimed the term is racist. The same professor also took issue with the use of “low-hanging fruit,” which she claimed referenced lynching. “Low-hanging fruit” does not appear on U-M’s list.

The memo also describes new ways for organizational development to adhere to standards of diversity, equity, and inclusion, or DEI.

One way the IT department is achieving this goal is through the use of “educational animations,” each lasting approximately two minutes.

“To bring moments in which inclusive language should have been used to a real-life perspective, we want to create educational animations/short videos for ITS staff to learn more about why these issues are important,” the memo reads.

The document lists three goals in creating the modules:

To encourage empathy for how others may feel when words have negative connotations.

To spur curiosity about why words matter, and direct people to other educational resources.

To provide a non-threatening, quick resource that is easily shared/disseminated.

The authors of the memo were sure to note that the videos would include stick figures, which they call “neutral characters.”

The memo also links to a document of case studies that gives employees recommendations on how to deal with “interpersonal interactions” that are unoffensive to transgender people, black people, and women.

The document closes with a sample email to vendors who choose to partner with ITS, informing them of why the changes to the language codes are taking place.

Finally, the task force recommends the creation of an advisory board which “will continue to support ITS as it relates to updating inclusive language resources and artifact naming standards and supporting ITS services in the adoption of inclusive language best practices.”

Many of these words and phrases on the Information and Technology Services’ memo also appear on a list in a recent Business Insider article which claims that they have racist histories.

According to the article, the term “uppity” described segregated black people “who didn’t know their place.” The phrase, “sold down the river,” used to describe someone who has been cheated, but it originally referred to plantation owners who would quite literally sell slaves down the Mississippi River.

“Gyp” (as in, when one is gypped) is apparently a derivative of “gypsy,” a term which describes the Romani, an ethnic group of people who, along with Jews, faced discrimination in Medieval Europe and the Holocaust.

Editor’s note: Rick Fitzgerald, a spokesman for the University of Michigan, provided this statement to The College Fix on Dec. 22:

This ongoing work around language is part of the ITS effort to create a workplace that is diverse, equitable and inclusive.

As a unit that is part of a world-class educational institution, it’s important to make sure all members of the ITS team understand the impact of language.

This effort remains a work in progress, but it’s important to remember this is an educational effort about language that will allow the ITS team to better serve the entire university community.

All educational work around language is undertaken within the context of the university’s strong and long-standing policies on freedom of speech, outlined here.