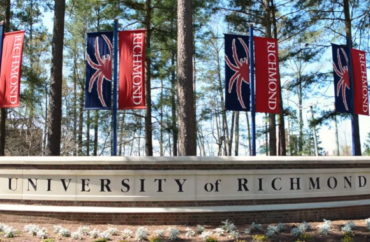 The Board of Trustees at the University of Richmond voted to rename six buildings on campus with connections to slavery, a decision that comes one year after the board declined to change the names of two of the buildings.

President Kevin Hallock and the Board of Trustees publicized the name-changing decision in an announcement to the university March 28.

“We recognize that not all members of our community will agree with these decisions. And we recognize that the University would not exist today without the efforts of some whose names we have removed. The Board’s decision to adopt the principles and remove building names, while ultimately unanimous, was extremely challenging,” Hallock and the board said in a joint statement.

The resolution impacts Ryland Hall and Freeman Hall, two buildings with names that the board considered changing last spring but ultimately decided not to.

Ryland Hall is an academic building named in 1915 to honor Robert Ryland and his nephew, Charles Ryland. Robert Ryland was the superintendent of Virginia Baptist Seminary and the first president of Richmond College, helping to build the university in its earliest stages.

The campus discovered while researching Ryland’s life in 2020 that the former president had owned over two dozen slaves. Ryland also supervised the leasing of enslaved people to work for the university.

The controversy surrounding Freeman Hall, a residential building, involved Douglas Southall Freeman, a graduate of Richmond College and Pulitzer Prize winner. Freeman promoted segregation, eugenics, poll taxes and other racist concepts within his writing, according to research conducted by the university in 2020.

The board adopted the name “Humanities Building” for Ryland Hall and “Residence Hall No. 3” for Freeman Hall. Four other buildings received new names when the university found that the people they were named after also owned slaves.

The university declined to comment on whether they have received any negative feedback over renaming of the six buildings.

Some observers have called the decision an example of campus cancel culture.

“The University of Richmond is ‘canceling’ one of its most distinguished graduates, Douglas Southall Freeman,” argued Civil War Chat in weighing in on the decision:

If there every can be a last word on Lee, Washington, and the Confederate Army of Northern Virginia, Freeman’s work has it. His work ethic was legendary. He kept a schedule that allowed him to accomplish a great deal in his two full-time careers as a journalist and historian. He rose at three every morning to drive to his office. Twice daily he walked to a radio station where he gave news broadcasts and analysis. After the second broadcast, he would drive home for lunch and a short nap before working another five or six hours on his current historical project. There could hardly be a better role model of success through self-discipline.

The board initially voted not to change the names of Ryland Hall and Freeman Hall in March 2021. They cited the “educational mission of the university” as a reason not to remove building names in a statement in March 2021.

“We also share President [Ronald] Crutcher’s view that the University’s commitment to a more accurate and inclusive history must be manifest in visible ways on our campus.”

But the decision prompted protests led by the University of Richmond Black Student Coalition, who demanded the names be changed. While the board refused to budge at first, they eventually announced a suspension of the decision in April 2021.

“We respect the deep convictions about these names among faculty, staff, students, and alumni, and the Board of Trustees and I accept that we have not handled either the process or the decision relating to the building naming matter as well as we should have. Accordingly, the Board of Trustees and I have decided to suspend the recent naming decisions and to review options for a broader, more inclusive process to determine how decisions are made about questions of renaming,” said former President Crutcher in an April 2021 statement.

The suspension was followed by an almost yearlong process that included forming a commission and conducting a survey on the matter.

A Naming Principles Commission made up of student, staff, faculty, alumni, trustees and expert representatives was charged with determining guidelines for naming buildings and other entities. The board eventually adopted 10 principles formulated by the commission, including that no entity may be named after a person who enslaved others.

The University of Richmond also solicited opinions from students, staff, faculty, alumni and parents through a survey conducted by Gallup, a global analytics firm known for its opinion polling. The survey concluded that about three in 10 constituents “feel relatively strongly about the issue,” while almost four in 10 “are less concerned about the topic.”

After taking the Naming Principles Commission recommendation and survey results into consideration, the board voted to remove the names of Ryland Hall and Freeman Hall. The board also voted to rename four other halls—Jeter Hall, Thomas Hall, Brunet Hall and Puryear Hall.

“Members of the Board began this process with strongly held differences of opinion, and the subsequent discussions were candid, thoughtful, and constructive. In the end, the Board concluded that the decisions outlined above are the best course of action for the University,” said Hallock and the board in last month’s joint statement.

The board’s vice president and secretary did not respond to a request for comment from The College Fix regarding the board’s change of course.

Signs on the renamed buildings were reportedly covered and removed by university staff several hours after the statement was released, according to UR student newspaper The Collegian.

The university plans to update building names on signs, campus maps, the university’s website, and in all other relevant locations, according to a document outlining the changes.

Hallock also announced March 28 that the university will publicly provide a full historical record related to the buildings.