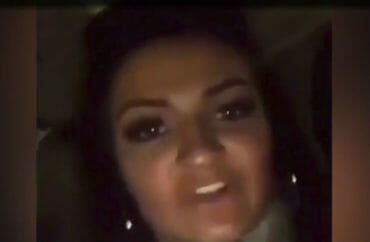 All speech ‘offensive to those in power’ is threatened

Former ACLU officials are warning the University of Alabama that it violated the First Amendment rights of a student it expelled for posting videos where she repeatedly uses the n-word.

It can’t even legally issue the student a lesser punishment for her rants, according to a law professor whose focus is the First Amendment.

Though the taxpayer-funded university didn’t say it expelled Harley Barber when it denounced her videos, the student told the New York Post Wednesday she was in the process of returning home to New Jersey following her expulsion.

If the punishment for Barber’s “profoundly offensive remarks” were actually allowed by the Constitution, then the state university “acquires the power to do the same for other speech that is offensive to those in power,” the former ACLU officials told UA President Stuart Bell in an open letter Thursday.

What code provision did she violate?

The Barber controversy was the second time in about a month that the Alpha Phi sorority had been thrust into the international spotlight.

In December the sorority refused to cooperate with Harvard University, which is threatening private Greek-letter organizations with sanctions if they don’t become gender-neutral.

Along with two other sorority organizations, Alpha Phi said the Harvard sanctions on its members “actually force women to choose between the opportunity to have supportive, empowering women-only spaces and external leadership opportunities.”

Please RT to show your support for the women of Harvard's Panhellenic council. pic.twitter.com/Ln8BfioOwY

But when it learned of Barber’s viral Instagram videos, Alpha Phi quickly abandoned its member, who mentioned the sorority in her videos that declared “I fucking hate niggers.”

The executive director of Alpha Phi International told AL.com Tuesday night that Barber’s “language and opinions” were “offensive and hateful” to the Greek community, and she was “no longer a member of Alpha Phi.”

UA President Bell shared his “personal disgust and disappointment” with the university community in a Wednesday message, writing cryptically that Barber was “no longer enrolled here.” (The Washington Post said unnamed “school officials” confirmed the expulsion.)

“We hold our students to much higher standards, and we apologize to everyone who has seen the videos and been hurt by this hateful, ignorant and offensive behavior,” Bell wrote. “This is not who we are; it is unacceptable and unwelcome here at UA.”

The president offered unspecified “resources” to community members who “have been impacted and would like additional support” from the university.

A university spokesperson confirmed to AL.com that Barber’s videos had been “reported to the Office of Student Conduct” and did “not align with the community expectations” for students, meaning she was at risk of official discipline. The spokesperson did not specify what code provision Barber allegedly violated.

President Bell could have punished MLK under the same rationale

The university quickly faced pushback from members of the legal community and civil libertarians.

On Thursday, former national and state ACLU officials told Bell they were “dismayed” by the university’s decision, even though they have “worked to resist racial subjugation and invidious discrimination all of our adult lives.”

They urged the university to “rescind the expulsion,” which they called an “emotional reaction” that proves ultimately to be “unconstitutional, un-strategic and likely to be ineffective.”

The University of Alabama is an “agent of the state that is subject to the First Amendment,” wrote Ira Glasser, who served as ACLU executive director from 1978 through 2001; Norman Siegel, the director of the New York affiliate from 1985 through 2000; and Michael Meyers, former ACLU vice president and “longtime head” of the New York Civil Rights Coalition. (The letter was sent on coalition letterhead.)

“The standard of ‘offensive’ as a criterion for banning speech or punishing speakers always depends on who is deciding,” they wrote, citing Malcolm X and Martin Luther King Jr. as examples of “offending” speech in their time and place.

“Dr. King and his colleagues always depended on and supported the First Amendment, even when it was invoked to protect the rights of the [Ku Klux] Klan to march,” the former officials told Bell.

Their letter closes with a suggestion of a more “educational” approach to Barber’s speech, such as a personal “meeting” with the student to use the situation as a “teachable moment.”

“There is never a guarantee of success from such meetings,” the letter states, but “it would be a more imaginative, less constitutionally dangerous and more educational initiative” than expelling Barber.

Bell is not the first public university official to allegedly expel a student for making racist statements in a video.

In 2015, University of Oklahoma President David Boren faced similar accusations from the legal community of violating the First Amendment rights of fraternity members by expelling them for leading racist chants on a bus.

Challenge to university officials to offer students a ‘safe harbor’

“The last several years have made clear what the preceding decades should have shown as well: Attempts to punish people for their views aren’t going to be neatly cabined just to the extreme,” wrote Volokh, whose blog is hosted by Reason.

The suppression and punishment of “supposedly racist speech” leaves room for university administrators to suppress the expression of any critical or offensive views –  such as those on illegal immigration, the Black Lives Matter movement, Islam and Israel – even if they don’t use “epithets,” he said.

[I]s there any safe harbor that officials like the University of Alabama president can offer to other students who want to express other views that the president may find “highly offensive and deeply hurtful,” and that “do not represent … the values of [the] University”?

The university doesn’t even have the leeway to issue “far lesser penalties than expulsion” for racist speech, the law professor wrote.

The university administration did not immediately respond to email inquiries from The Fix Sunday, asking for its response to legal criticisms of Barber’s expulsion.

MORE: A university ‘must have had control over the situation’ to be liable