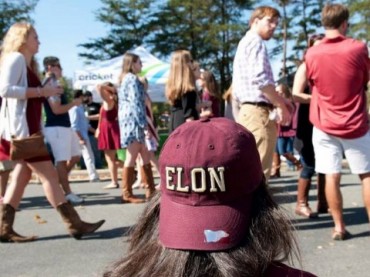 ELON, N.C. – Elon University has dropped the term “freshman” from its vocabulary and replaced it with “first-year,” a move made official this fall and implemented in everything from its website to orientation workshops.

The change at the small, private liberal arts college in North Carolina was done to promote inclusivity, celebrate diversity, and ensure the campus did not promote sexist stereotypes or create a hostile and unsafe environment for female students, campus officials said in interviews with The College Fix.

Leigh-Anne Royster, director of Elon’s “Inclusive Community Wellbeing,” said in an email to The College Fix that she has been told by some that they believe the term “freshman” is outdated, and that replacing “freshman” with “first year” is a “celebration of diversity.”

Royster stated the word “freshman” naturally insinuates a hierarchy among students on campus. She said she believes that students are viewed as younger and less experienced when referred to as “freshman.” With that, Royster stated “freshman” may contribute to sexual violence on campus because it labels the youngest students, causing them to be targets.

“The term has often been felt to refer to the vulnerableness of young women in college for the first time,” Royster said. “Given the rates of sexual violence perpetrated against women on college campuses, it is useful to examine any use of a term that suggests that a group of people just entering college might be targets for such violence in any way.”

Royster said she believes this change will positively impact future students at Elon and foster progress in inclusivity related to gender.

“Using language that allows for a more inclusive understanding of gender will be important in our culture moving forward,” she said. “Moving away from language, including pronouns, that denote a gender binary will be something we see more and more as our culture evolves to celebrate a wider range of identities and expressions.”

At this semester’s student orientation leader training, administrators made it clear that incoming students must be called “first-years.” No public announcement was made regarding this change — administrators relied largely on word of mouth to carry the news.

“They engrained over and over in our brains that it was supposed to be ‘first-year,’ not ‘freshman,’” Schukraft said. “They were very adamant about using the correct terminology and stressed the importance of using language that would make the new students feel comfortable.”

But Greg Zaiser, vice president of admissions and financial planning, said in an email to The College Fix that the change improves the campus environment.

Zaiser said administrators believe the change keeps with Elon’s core values, and is a more appropriate description for new students. He added some believe “freshmen” is a “sexist” term, and Elon is attempting to move away from gendered stereotypes.

“As an inclusive community, Elon strives to incorporate language that is current and reflective of our student body,” Zaiser said in an email to The College Fix. “ ‘Freshman’ isn’t necessarily wrong, but it’s not completely applicable to Elon’s entire population, which includes internationals, transfers, spring admits, along with traditional students beginning their first year on a college campus.”

College Fix contributor Diana Stancy is a student at Elon University and president of the Network of enlightened Women (NeW) chapter at Elon.