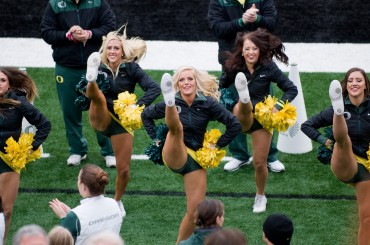 Watching basketball with your dad as an adolescent can get pretty awkward whenever the cheerleaders come out. I hated halftime for years.

That same juvenile aversion to sharing any remotely sexual experience with your parents is now driving decision-making at the University of Oregon, which is – no joke – investigating whether cheerleading routines are encouraging sexual assault.

First, some background: The school has been coping with terrible headlines around sexual assault in the past year.

It’s fighting back against a lawsuit by a student who accused the school of turning a blind eye to her allegations against three basketball players. It openly disavowed a professor whose research claims that nearly one in two sorority women on campus have been victims of “non-consensual sexual contact.”

The school has also idiotically overreacted to anything with a whiff of harassment – threatening a female student with expulsion for making a lame sex joke out her dorm room window, for example. Its student government has also been quick to pounce on Greek life for that one professor’s questionable study.

The cheerleading comments came at a recent meeting of the board of trustees, during a discussion on sexual assault, the Eugene Register-Guard reported. Trustee Ginevra Ralph “hesitated” before saying:

“I have watched people be incredibly uncomfortable with the U of O cheerleaders,” she told the trustees, “and they actually leave the basketball (arena) during intermission because of the overt sexual dancing, or whatever you want to call it.”

UO cheerleaders perform traditional straight-arm leaps and cheers with pom pom shaking, but they also shimmy their shoulders and chests, roll their hips and pop out their bottoms.

The cheerleaders perform to overtly sexual lyrics, such as Jessie J’s “Bang Bang” …

“It’s one thing if someone is doing any of that on their own,” Ralph told the trustees, “but we are making a public statement. … I’d like to see us analyze it a little bit.”

The university president responded to Ralph – the only trustee to bring up cheerleading – with this audacious admission:

UO interim President Scott Coltrane assured Ralph that the university will ask about provocative dancing as part of its $500,000 effort to prevent sexual assault on campus. One part of the plan, Coltrane said, is to train and certify three Title IX deputies, including one assigned to the athletic department. The deputies would help train staff, and, in athletics, look at the messaging that the programs put out, Coltrane said.

The prudes have a point

It’s hard to overstate how offensive this is to all sides of the raging debate over the extent of “rape culture” – or whether it even exists – on American campuses.

Ralph sounds like a prude, enemy of free speech and victim-blamer, as the Register-Guard notes. Coltrane sounds like a slut-shamer.  The school is becoming ever more intrusive in students’ lives, and now wants to ruin sports, civil-liberties folks and red-blooded men will think. What, are Title IX officers going to measure skirt lengths now?

But this reactionary attitude toward cheerleading is no surprise given the dominant in thread in campus feminism – that young women are helpless waifs who must be protected from lecherous young men, even when they’re engaged in mutually enthusiastic sexual congress. (See UO’s oddball response to the nude modeling classes on campus.)

That lawsuit against the school includes the allegation that the assault took place after the female student complied with the players’ request to “shake her butt” in the bathroom. Did it encourage the players? Who knows?

Students have seen far worse on HBO’s Girls, from a terrible role model.

Booze and drugs probably play a far bigger role. The anything-goes message that students get when they arrive on campus – exemplified last month by Wesleyan’s drug overdose scandal, but matched or exceeded by a near-Roman celebration of flesh by even campus departments year-round – is far more damaging than some pretty young women grinding on the floor for a minute or two.

University of Oregon leaders could strike a balance between these competing imperatives of freedom and safety by bringing back the awkwardness: Require young men to be accompanied to games by a parent or elder from the community.

Surely I’m not the only grandson to live in fear of “The Grandma Look” when I say something off-color.