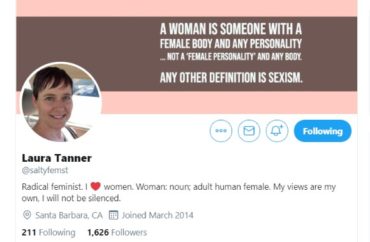 What are the odds a feminist graduate student could be under siege for feminist rhetoric on a California campus?

Under an intersectional framework and evolving definition of “woman,” much higher than you might expect.

University of California-Santa Barbara doctoral students, alumni and “allies” are demanding the administration take action against Laura Tanner, an outspoken critic of transgender ideology and doctoral candidate in its Department of Feminist Studies.

Tanner’s Twitter feed is dominated by discussion of transgender ideology’s threat to women, including young lesbians. She believes that transgender women – biological males – are wrongly appropriating a female identity.

Her header image bluntly declares: “A woman is someone with a female body and any personality … not a ‘female personality’ and any body. Any other definition is sexism.” School newspaper The Daily Nexus reprinted several of her tweets that it considered “transphobic.”

She has designed and taught two courses in the department and served as teaching assistant for four courses, but it’s not clear if she’s scheduled to teach again. Tanner did not respond to emails or Twitter messages from The College Fix this week.

Critics on Twitter want her removed from teaching or worse, with some lobbing personal insults at Tanner such as “absolute trash” and “dumb bitch,” according to the Daily. One declared “that bitch needs to die,” and others have targeted her for being white.

At least one former Tanner student, Kyremina Youssef, has publicly discussed filing a complaint against her with the department and university ethics board, citing Tanner’s tweets. She and another student also held a campus demonstration against her last month.

Another student who complained about Tanner posted a response from Laury Oaks, the chair of Tanner’s department. Oaks called Tanner’s social media posts “distressing” and told the student he could also file ethics and Title IX complaints.

He also posted a response from Title IX Coordinator Ariana Alvarez, who said her office is “actively engaging in a response” and asked him to forward “any new material/posts” by Tanner.

Title IX director is also working on this! Make sure to email/call her pic.twitter.com/j79Tn9CEXY

Despite these official responses to at least one student, UCSB and Tanner’s department have been publicly mum in response to the activism against her.

The Department of Feminist Studies has yet to answer its phone any time The Fix has called, and did not return a voicemail. But a spokesperson for the university told The Fix Thursday night that the department asked her to respond on its behalf.

Deputy News Director Shelly Leachman did not answer Fix questions about whether invalidating transgender identity is a conduct-code violation at UCSB, either under any context or specifically in a teaching position.

“University policy prohibits discussing details related to personnel issues and we are prohibited from discussing student information,” Leachman wrote in an email. The Fix did not ask about either.

“The University has a process for reporting bias incidents on campus, and procedures for addressing these issues when they arise,” Leachman continued:

The University also has strong policies related to protecting academic freedom and freedom of expression. Campus community members are encouraged to report violations of these policies and of misconduct in all of these areas.

MORE: The Equality Act is actually the ‘Female Erasure Act’

Revolting witch-hunt seemingly going on at @ucsantabarbara of a teaching assistant (the more junior the person, the more feral the campaign apparently – funny, that). Please RT and if any nearby academics can support @saltyfemst please do. https://t.co/XHKQPB1twX

Gender binary ‘rooted in the logics of colonialism, racism, and gendered domination’

The dispute between Tanner and pro-trans activists illustrates the struggle over the boundaries of feminism within the academy and the broader culture.

She is part of a small but increasingly vocal feminist minority, often slurred as “trans exclusionary radical feminists.”

Their insistence that men can’t become women has ignited anger among the trans-welcoming and ally-oriented environments that dominate academia from coast to coast. The subject is a chapter in a new book on youth activism by Reason’s Robby Soave, a former Fix editor.

Tanner is the unnamed subject of two letters that appear more generally to criticize the curriculum in the Department of Feminist Studies. Both are written so vaguely, however, that it’s not clear whether they take issue with instructors other than Tanner.

The first, dated June 12, was issued “in Support of Trans, Non-Binary and Sex Working Students.” Fewer than 20 current and graduated doctoral students in the department signed the letter.

They claimed the “gender binary … is rooted in the logics of colonialism, racism, and gendered domination”:

Feminist Studies is a field rooted in traditions of protest and political action. To the students who are troubled by all of this, we support your freedom of speech as it may manifest in awareness-raising, protest, etc and offer our collaboration in efforts to address transphobia and anti-sex worker sentiments on this campus.

The letter suggests department faculty have already assured the signatories that they agree with the criticisms. It demands “transparency” about a curriculum committee meeting “to address concerns raised by students regarding transphobia, anti-sex work rhetoric and environments of safety for trans students.”

Relevant to Tanner, the letter demands that “those espousing openly racist, anti-sex work and transphobic beliefs do not continue to teach or TA for the department.” (It’s not clear if they are personally accusing Tanner of racism.)

The “alumni and allies” letter, posted June 14 and signed by predominantly UCSB graduates but also those from other UC campuses, does not single out an individual unnamed instructor.

Rather, it accuses UCSB of copying the Trump administration and its “rampant transphobia.” Echoing a common theme of intersectionality, the letter equates views such as Tanner’s with physical violence.

“[S]ome deleterious and hateful material has been presented in the [Feminist Studies] classroom and online targeting trans students,” the letter reads:

Material that denies the existence and lived experiences of trans people, especially trans women, is not only factually inaccurate but harmful to trans students. Such views are incompatible with the ethical responsibilities of Feminist Studies as a discipline, and should not be espoused by instructors, TAs, or in course material.

The department becomes complicit in “murders and hate crimes targeting trans people,” as well as their suicides, when it allows material “that denies the reality of trans people’s experiences or reifies gendered and sexed binaries as essential or real,” the letter continues. It has about 400 signatures as of Thursday night.

The Fix has been unable to find specific accusations of transphobic behavior by Tanner in the classroom or curriculum, however.

In her tweet floating the idea of filing a complaint against Tanner, Youssef didn’t mention any classroom incident. “I had her last quarter and she did not know half of the things we talked about and tried to bring her own struggles in when we spoke about poverty,” she wrote. “Ma’am, youre [sic] white.”

Laura Tanner is NOT qualified to be teaching here at UCSB. Seeing her transphobic comments on twitter proves it. I had her last quarter and she did not know half of the things we talked about and tried to bring her own struggles in when we spoke about poverty. Ma'am, youre white

Another student told The Fix that Tanner was not a good teacher, but didn’t mention her views as a reason. “[S]he was very unresponsive to my requests and went directly against what the professor set as the procedure which made navigating the course very difficult for me,” he wrote.

Youssef told the Daily that they would organize more rallies in the fall if Tanner weren’t removed from teaching at UCSB. Moini claimed the trans community on campus was “unsafe” as long as she taught.

UCSB has a professor/TA who is openly transphobic on twitter and is allowed to teach LGBT studies courses so we decided to do something about it!! pic.twitter.com/vHC6P203Rx

@saltyfemst slide thru dumb bitch !ITS ON SITE ! Fuck u and ur transphobia! We’re here outside the arbor from 11am-2pm, we won’t jump you 🥵 pic.twitter.com/47qgA2PW6U

Campaign against her includes incitement, defamation, harassment, she says

The doctoral student has continued tweeting her criticisms of transgender ideology since she became a cause celebre at UCSB.

She particularly focuses on the health risks of transitioning for children, the threat to lesbians from treating men as women, and the chilling of speech such as hers, especially in the United Kingdom.

In one Twitter thread days after the critical letters were published, Tanner shared several stories she has received from like-minded women at universities who are afraid to speak publicly.

I am a Gender Studies student at ###### and my dad is an alum of UCSB. I'm also a survivor of men's violence and I really appreciate women in feminist studies standing up for women's rights…something that's becoming all to rare." 2/2

Among the Tanner tweets that the Daily identified as transphobic: “No child is trans. It’s not possible to be born in the wrong body.”

Another: “Rather than resolving dysphoria or dysmorphia, ‘transition’ maintains & reinforces a state of opposition to one’s own body … This is not mental health care.”

Tanner told the Daily that the student campaign to get her fired “has included incitement to violence, defamatory lies about my teaching, and harassment in regard to my race and sexuality.” She described the slang term TERF, used against women like her, as a “slur used to denigrate and silence women.”

She also questioned the Daily in a tweet for the headline on its article. It should instead say: “UCSB doctoral candidate being harassed for telling the truth and standing up for women and children.”

On her website, Tanner elaborates on the centrality of transgender ideology to her research:

My research and scholarship are currently focused on resisting the discursive erasure of women and girls, particularly in health and gender discourse; attempts to disassociate the female body from womanhood; the mistaken idea that biological sex is socially constructed or possible to change, the loss of women and girls’ civil rights through changes to laws that remove sex protections and define gender as a feeling; and the abusive and dangerously experimental practices of medically “transing” children and young adults.

She told the Daily that the “silencing, no platforming, and retaliation against academics who question or critique trans ideology” is not limited to America.

“This is especially concerning in the university environment, which is supposed to be a place of open, unimpeded exchange of ideas.”