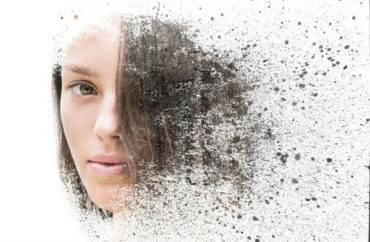 ‘This is Planned Parenthood’s new line of business’

WASHINGTON – Who would have thought lesbian activists would have so much trouble getting a progressive organization to sponsor their event?

It turns out progressive leaders aren’t eager to have a public debate over the next wave of the “men’s rights movement” – the derisive term these women use to describe transgender activism.

That’s how the conservative Heritage Foundation ended up hosting Monday afternoon’s event with three radical feminists and a man who formerly identified as a woman.

It’s the sequel to a Heritage event from nearly two years ago, which brought together conservative women and radical feminists to warn of transgender activism’s threat to females, particularly young girls. Back then, the Women’s Liberation Front was still suing the federal government to block its redefinition of sex as inclusive of “gender identity.”

Even though the Trump administration soon rescinded its predecessor’s guidance, rendering the case moot, transgender students continue suing and schools remain “very confused” about their legal obligations, according to Kara Dansky, a board member of WLF.

That’s why WLF continues filing friend-of-the-court briefs in a bid to get the Supreme Court to settle Title IX’s scope, said Dansky, who formerly served as senior counsel to the ACLU and executive director of the Stanford Criminal Justice Center.

The legislative counterpart to redefine Title IX is the Equality Act, which would be an “unmitigated disaster” for women, she said. Strongly backed by congressional Democrats, the bill would add gender identity to civil rights law.

Gender identity employs either circular reasoning or “regressive, outdated, sex-based stereotypes” to determine who is a man or woman, however, Dansky said. When an audience member proposed calling the bill the “Female Erasure Act,” the speakers embraced the idea.

Question their gender identity, lose your children to the state

The event largely focused on stories from mothers about their daughters who rushed into male identity, the fecklessness of the medical community and the personal toll of taking on transgender activists and their well-funded allies.

It only happened at Heritage because “no left-leaning institution was willing to host it,” said Ryan Anderson, senior research fellow at the think tank. One of the funders has a daughter who is transitioning, and the mother has been “deplatformed” by the political left, he said.

Anderson scolded religious groups that have offered to support gender identity in civil rights law if they can get exemptions, alluding to the Council of Christian Colleges and Universities and National Association of Evangelicals. He shared Centers for Disease Control statistics that show strong overlap among transgender identification, feeling unsafe in school and bullying in high school, suggesting social causes are a major factor.

Jennifer Chavez, a lawyer and WLF board member, showed the audience a video of a “farewell penis party” featuring a teenage transgender celebrity, Jazz Jennings, before sex-change surgery. The video, in which Jennings screams “Let’s cut it off,” does not appear to be posted on Jennings’ popular YouTube page.

But Chavez fought back tears as she read “heartbreaking” letters from mothers of transitioning daughters. One said her autistic daughter got the idea she was a boy from a school presentation, and that her gender identity therapist said she’d be more likely to commit suicide if her mother didn’t let her have hormone drugs. Parents who publicly question their children’s gender identity in New Jersey can face “legal repercussions” and even lose custody of their children, she wrote, explaining why she remains anonymous. 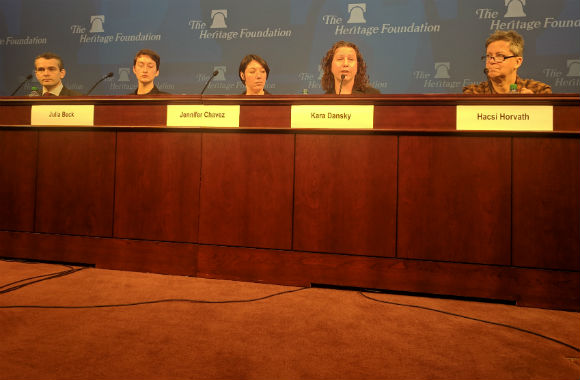 Another said her 14-year-old daughter, a victim of “multiple traumatic events,” became a “foul-mouthed pansexual male” practically overnight and reported her mother to child protective services for not using her male name. An endocrinologist taught the girl to inject herself with testosterone, and she ran away to complete her transition in Oregon, where she’s now homeless. The mother asked why gender transitioning was not treated with the same outrage as female circumcision.

Other parents’ letters said their children delivered canned speeches about their sudden change in gender identity, likely taken from social media, and that medical professionals aren’t helpful, if they are even involved. Planned Parenthood gave one girl transition hormones with little fuss, “bypassing her psychiatrist altogether,” Chavez read from another letter: “This is Planned parenthood’s new line of business.”

Hacsi Horvath did not share his experience identifying as a woman for many years and “snap[ping] out of trans-trance in 2013.” Instead, the University of California-San Francisco epidemiologist indicted the medical community for not challenging the decades-old “assertions of a few psychologists” that now rule transgender ideology. He agreed with an audience member that transgender ideology was a “monster that was built in the laboratory of academia,” especially since the 1990s.

“It’s spin, and if you read it carefully … there’s enormous gaps” in the scientific support for transgender theories, he said. “These are people who are trained to be critical,” but medical professionals aren’t taking the time to actually read the literature, which would convince them “the science is complete junk.” It’s important to “not play along” with transgender language, Horvath continued: “Don’t gaslight yourself.”

There’s no realistic way to reverse transitioning, either medically or socially, after it starts, Horvath claimed. Doctors put children on puberty blockers around 8-9 years old and are eager to do genital transitions in high school because the children will need their parents to help with “extensive aftercare” before they go to college. (Despite detransitioning, Horvath’s own physical features still resemble those of a butch lesbian.)

Horvath said rapid-onset gender dysphoria, in which particularly girls suddenly identify as boys, is “the new eating disorder” or “new goth” in the form of medical intervention. “Nobody wants to be a bigot” by challenging this self-identification, but medical professionals are ignoring other potential causes: “internalized misogyny” in girls and pornography-driven autogynephilia in boys.

Julia Beck has battle scars from her combat with transgender activists: She got kicked off the Baltimore mayor’s LGBTQ Commission for speaking “biological facts.”

The Women’s Liberation Radio News producer was found guilty of “violence” for using male pronouns to refer to a convicted male rapist who identifies as a woman and sexually assaulted women in the prison where he was placed, Beck said. The head of the commission is a transgender “white trust-fund baby” who persecutes those who don’t use inclusive language and makes all women’s lives worse, she said.

Beck shared her bewilderment of listening to her supposed allies say that biological sex is fake – which would render homosexuality fake – and a woman describing her vulva as male. “My accuser,” the commission head, “snapped his fingers as if we were at a poetry reading,” she said. All voices are supposedly welcomed – “except women’s except lesbian,” and “everything is about the ‘T’ now” in the LGBTQ coalition.

Transgender activism is an attack on the very identity of homosexuals, particularly lesbians who are pressured to accept males in their spaces and dating pools, said Beck (below), whose anger was the most pronounced among the speakers. “Gender is based on rigid sex roles” that legitimize the oppression of women, who “don’t need to wear makeup or high heels to be women,” she said.

“We are losing an entire generation of sisters to this madness,” she concluded, drawing perhaps the loudest applause of the event. 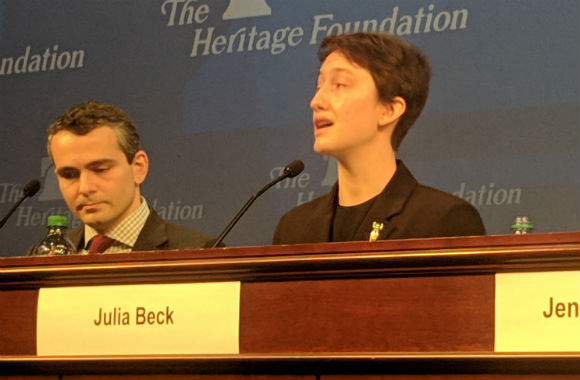 WLF’s Dansky, who is also active with the anti-gender identity coalition Hands Across the Aisle, emphasized why it’s crucial to understand “sex” correctly in both society and law.

Without sex retaining its historical meaning in Title IX and other laws, “women’s rights in general will utterly disappear” and women may cease to exist as “a coherent category of civil rights protection,” she said. Only the Supreme Court can end the dispute over what sex means in federal law, which is why WLF has filed briefs in two cases that may come before the Supreme Court, known as Gloucester and Boyertown.

Conservatives need to wake up to the “power and the money” behind transgender activism, Dansky said: They tend to think it’s so self-evidently ludicrous that the Equality Act could never become law.

In addition to legal arguments and money, skeptics of gender identity need to “give cover to each other” to argue their case in public, Chavez said. She mentioned a story from the book Galileo’s Middle Finger about a physician who was viciously attacked for his unpopular research on transsexuality.

It means talking to friends and neighbors face to face, not over the internet, Beck added. “You’re going to lose friends” over this issue, “but that is a risk that we should be willing to take.”