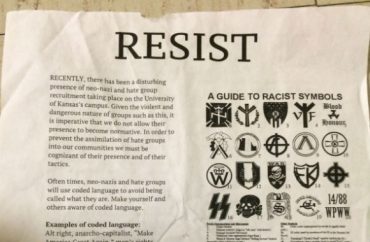 Oppose safe spaces? You might be a white nationalist

A spokesperson told Campus Reform that the postings – which flagged sayings such as “Make America Great Again” and “anarcho-capitalism” – had given “no indication of who produced or posted them.”

They are titled “RESIST” and include a pictorial glossary of “racist symbols.”

Young America’s Foundation said the flyers, which were found around campus by the KU Young Americans for Freedom chapter, also claimed that “neo-nazi and hate group recruitment” was happening on campus. The flyers further said this:

Opponents of safe spaces, inclusivity, social justice, intersectional activism, and multiculturalism are opponents of liberation and equality for all people.

According to Stand with ME, an anti-Trump campus group that previously called the conservative Young America’s Foundation a “hate group,” the flyers were “created and distributed” by the School of Social Welfare, Campus Reform reported.

Never a dull day in the life of a KU YAFer https://t.co/ZbtPqv23Pp

It also cited a Facebook post by a KU student that started with a trigger warning for “Neo Nazis” and continued:

At this point, I’m sure you’ve heard about neo-nazi groups recruiting on campus since the inauguration.

Below are pictures of a flyer from the School of Social Welfare, available in Twente Hall, on how to spot coded racist language and symbols, and how to respond to any flyers, chalking, conversations, witnessed harassment, and the like. The flyer lists who you need to contact when reporting, both within your school and at the university level.

The flyer also includes contact information for deans, “senators, and representatives because the fight doesn’t end at the university,” said the student post.

The School of Social Work didn’t respond to a Campus Reform request for comment, it said.

YAF chapter member Joshua Muse told Campus Reform that he had previously been called “a white supremacist, racist, and xenophobe simply for my support of Trump” during the campaign.

“Given KU leftists’ well-documented inability to tolerate conservatism, this development should not come as a surprise,” said Young America’s Foundation, citing a pair of leftist mobs that crashed and heckled the YAF chapter’s meetings last fall.