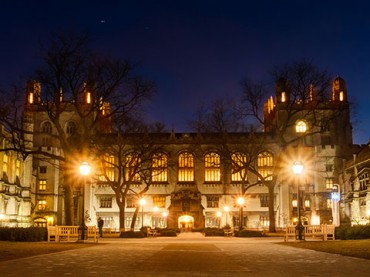 The show went on at the University of Chicago Thursday night when Zineb El Rhazoui, a Franco-Morrocan cartoonist for Charlie Hebdo and human rights activist, spoke to the campus French Club, The Chicago Maroon reports.

But security was ramped up owing to a “massive Twitter campaign under threatening hastags against El Rhazoui in which ISIS supporters called for her assassination”:

[Attendees were told they] would be searched and would be required to present valid identification that matching their names on a restricted RSVP list. Large bags were not allowed into the hall and a coat check was enforced. Law enforcement officers were visibly armed within the Law School premises, and the auditorium was watched by at least seven officers at all times during the talk.

Most disturbingly, the school canceled the “annual winter Humans vs. Zombies game, in which students chase their opponents across campus with Nerf guns,” and players were warned they “could face University and legal punishment if they participated on Thursday.”

The event organizer praised the school for its willingness to jump through hoops to make the speech a reality:

“The common realization was that canceling this event would be a defeat,” [French Club president Eve] Zuckerman said.  She further emphasized that saying security costs and risks were too high to invite El Rhazoui would be giving up on the University’s commitment to freedom of speech. “How many Charlie Hebdo journalists have been invited to speak in the U.S.? Zero.”