But it says no to paying for students’ lawyers

Even before DeVos’s department finishes the notice-and-comment regulatory rulemaking that her Obama administration predecessors ignored, the University of Kentucky has already made changes that strengthen fairness in its own Title IX investigations.

The Kentucky Kernel reports that while UK is keeping the low evidence standard of “preponderance” – a common reaction by universities to the DeVos interim guidance – it is junking a provision that lets accusers appeal “not responsible” findings in favor of the accused.

Double jeopardy is banned in U.S. courts but not uncommon in Title IX proceedings. A recent survey found it’s popular with students when the subject is sexual-misconduct investigations. Such a provision is reportedly responsible for at least one attempted suicide by an accused student.

The university is also requiring findings of sexual assault to be unanimous among the three-member disciplinary panels. Before June 18, when the revised policy took effect, students could be found responsible with only two out of three panel members in agreement.

The structure of appointments to disciplinary panels has also changed: Each college in the university will send faculty members to a “pool” to be tapped to hear cases, rather than the president making appointments to the pool.

According to the Kernel, the administration rejected one major recommendation from the ad hoc committee created by President Eli Capilouto: that the university make a “pool of funds” available for accusers and accused students to hire attorneys in sexual-assault cases. (A university spokesperson confirmed to The College Fix that lawyers hired by students can actively speak on their behalf in campus proceedings – an option that is rarely granted to students elsewhere.)

The revisions were made to a document known as Administrative Regulation 6.2. The document’s Web address incorrectly suggests they took effect in 2008. The previous version took effect in 2016.

The Kernel reported that President Capilouto announced the changes in an all-campus email last week, though they aren’t apparently mentioned by any online university source, from Capilouto’s blog to university news and social media pages.

A spokesperson for the university offered The Fix a copy of the email from Capilouto after this post was published (below).

The president emphasized that the committee was appointed by the University Senate, that he “carefully considered” its recommendations after a year-plus review, and that the committee made the draft police “available throughout the campus for feedback.”

While the administration rejected the lawyer-funding proposal, Capilouto’s email makes clear that the parties can “have” an attorney “during the investigation and any subsequent disciplinary hearing.” 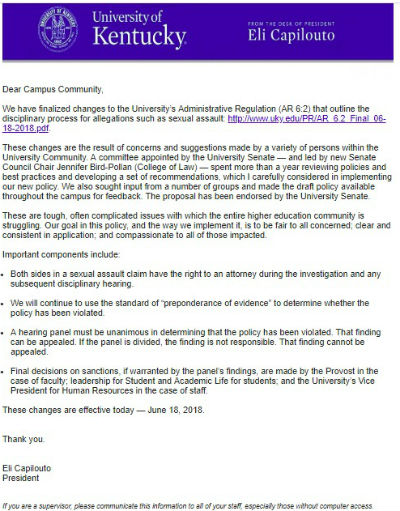 The spokesperson told The Fix in an email the university doesn’t “routinely” post official communications to the UK community where the public can see them, even for major policy changes like this one.

But it has “actively engaged the media on this issue,” both the school paper and outside outlets, he said:

We don’t post every email online or in a blog. The local media routinely has then and writes about or covers the ones that they believe have interest beyond the campus community.

The spokesperson later corrected himself and said Capilouto’s announcement had been posted to his page for “campus messages,” which The Fix had not noticed.

UPDATE AND CORRECTION: A spokesperson for the university provided a copy of Capilouto’s email to the university community to The Fix after this post was published and explained why it wasn’t posted online for the public to see. He also confirmed that lawyers hired by students can actively represent them in campus proceedings. The spokesperson later corrected himself and noted the announcement had been posted on Capilouto’s page for “campus messages.” The email, explanation, confirmation and correction have been added.