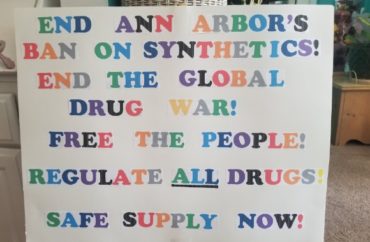 Student activists and local drug advocates gathered on Sunday at the University of Michigan Ann Arbor to call for a state-wide decriminalization of psychedelic drugs.

Sponsored by the public university’s Student Association for Psychedelic Studies and other organizations, the first annual Entheofest also celebrated the one-year anniversary of Ann Arbor’s decriminalization of entheogenic plants, also known as psychedelics.

Some students shared why they decided to attend the event.

“Psychedelics … have been used by humans for thousands of years for healing, both (for) interpersonal and intercultural healing,” social work student Christian Smith told the Michigan Daily. “And this is a celebration of the year anniversary of decriminalizing sacred plant medicines in Ann Arbor,” Smith told the campus paper.

“Decriminalizing these substances reduces the number of people who are incarcerated through the racist War on Drugs,” Moss Herberholz, the psychedelic student group president, told the campus paper.

Entheofest was great! I made a huge splash wearing this shirt and carrying this sign. Everybody and their brother took pictures of me. I signed a media release for somebody. Had a lot of great conversations with people. Lots of organizers want to work with me. pic.twitter.com/y2DDQSxxHY

Michael Williams, a member of Students for Sensible Drug Policy, explained how using psychedelic drugs helped him get off drugs.

Williams now regularly uses psychedelics instead of regularly using opioids and meth, according to comments he gave to the Michigan Daily.

It was a single psychedelic mushroom experience trying to just chase another high, where I took a look in the cosmic mirror and saw myself and the things I was doing to my body, and realized that I needed to make some life changes…I then was able to give up opioids, able to distance myself from methamphetamines, and started looking at psychedelics as a way to connect with spirituality and find myself.

Other cities including Denver and Oakland have decriminalized psychedelics.