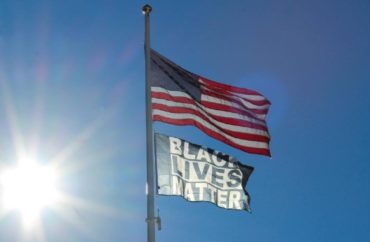 The Black Student Union at the University of New Haven raised the Black Lives Matter flag on campus for the first time.

The flag raising, which kept the American flag on top of the BLM one, included a speech from New York Congressman Jamaal Bowman, according to the campus newspaper.

“Black history is all our history,” Dean Rowe-Allen said at the February 1 event.

BSU VP Brinney said the flag will “promote unity and inclusion across all races.”

“This flag raising today, and what this Black Student Union is leading at the University of New Haven, is what everyone in our country needs to be a part of,” Congressman Bowman said.

“For the first time in the University’s history, we raised a Black Lives Matter Flag. What first was a hashtag after the death of Trayvon Martin has now become a global movement,” Westwood wrote. “As a minority student at a predominantly white institution, I believe it is imperative that we all know that our lives matter here. I am honored to be part of change.”

“When we say that Black Lives Matter, we aren’t saying all lives don’t matter, but that all lives can’t matter if Black Lives Don’t Matter,” the forensic science student wrote.