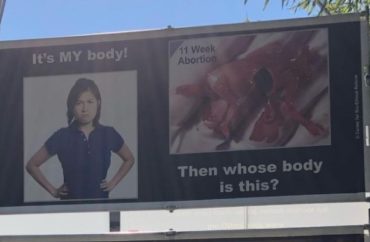 Some students at the University of Tennessee in Knoxville want to see limits on free-speech after a pro-life group came on campus last week.

The Center for Bio-Ethical Reform uses graphic imagery showing what an aborted baby looks like. CBR also compares abortion to the Holocaust and lynchings of African-Americans.

“Why are these people allowed to table on campus? This is so much more belligerent and misleading than the normal pro-life tables that usually inhabit this quad,” student Sean Heiser wrote in an Instagram post on September 27.

This is an [ high-level research] University, and these people dwell in pseudoscience and thrive off anti-intellectualism. Their rhetoric traffics in religious and moral extremism, intimidation, emotional manipulation, and hate. This isn’t a partisan issue, this is about fostering a safe and equitable learning environment. They should not be here, and when you stand near their booth, the emotional distress of students is palpable.

Heiser has some support in his attempt to limit the free-speech rights of views he does not like.

“There’s free speech and then there is displaying violent imagery and graphic imagery such as this,” Haze Karmo told the Daily Beacon. “There are limits to free speech and people don’t consent to seeing things that can be traumatizing such as this,” Karmo told the campus paper. “This is not even an issue about free speech, this is an issue about consent and what you see and what you are being yelled at.”

Other students protested the display as well.

Vols for Life, the campus pro-life group, invited CBR onto campus. The graphic imagery group has come to campus since the 1990s, the Daily Beacon reported.