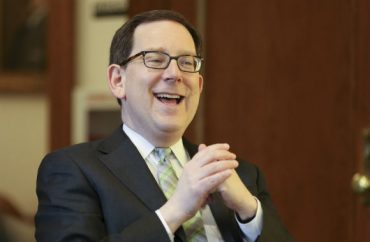 I’ve made no secret of my contempt for the University of Oregon, my father’s alma mater, for its punishment of a law professor who wore an offensive Halloween costume at her own party.

But I have fresh new contempt for UO President Michael Schill, himself a lawyer, for his utterly appalling defense of the finding that Prof. Nancy Shurtz committed “discriminatory harassment” against students who showed up voluntarily to her house.

In his “Open Mike” column (cute), Schill said coverage and commentary about the situation “sensationalized and caricatured what is a very serious incident that deeply affected our students.”

Because the message from Shurtz’s costume (a black male scientist) was not self-evident, she violated “the right of students to be free from racial harassment,” Schill claims.

Yet he claims to have been “torn” by the finding that Shurtz’s conduct is not protected by academic freedom:

I believe that freedom of speech is the core value of any university. When faculty members pursue their avocation—teaching students and conducting research—they must be able to say or write what they think without fear of retribution, even if their views are controversial, and even if their research and their views risk causing offense to others. …

For me, stating that principle in the abstract is easy and uncomplicated. But here is the problem—figuring out when and whether there are legitimate limits on freedom of expression actually is complicated. In general, it is not acceptable for someone to use her rights to deprive another of her rights. I should not be able to use my speech to deny others of their right to be free from racial or sexual harassment. I can hold—and share—controversial views. But that does not give me the right to harass specific individuals or to speak in any way I wish to, in any place, or any point in time.

Let’s get one thing clear here, Mike: No one has accused Shurtz of being intentionally offensive. Everyone acknowledges she meant well, but bafflingly had never heard of “blackface” or knew its history in mocking black Americans.

That is not “harassment.” Yet Magic Mike keeps making his magical harassment argument:

Only a small number of legal commentators would say that faculty members should be immune from all harassment charges on academic freedom grounds. … For whatever it is worth, I personally am fairly close to the end of the spectrum that believes speech should be maximally protected. But even I believe that there are cases when speech or conduct is of relatively minimal value compared to the great harm that it may do to our students—particularly to students who already struggle with isolation and lack of representation.

He compares Shurtz’s costume – worn at her own party, to which she invited many people including students, which they were free to leave at any time with no repercussions – to a professor who “repeatedly uses the ‘N’ word for no apparent reason” in a “required class,” or who makes “repeated, sexually explicit remarks” to students “for no educational purpose.”

Even then, Schill admits Shurtz’s behavior was not at all like his hypothetical scenarios, yet she is still culpable because some of her students “felt pressure to attend and to remain at the event”:

They felt that they could not leave [even to go to another Halloween party?] without jeopardizing their standing in the class, and they also felt that the offensive nature of the blackface was the equivalent of hearing the “N” word. In these circumstances, should the university have ignored the event or should it have taken action proportionate to the offense? What lesson would we be teaching our students if we let the incident end without even an official letter of reprimand?

You could be teaching them to use their words to counter perceived offensive behavior, perhaps?

Does anyone seriously think that the blissfully unaware Shurtz would have retaliated against students who privately told her (assisted by Googling) that wearing blackface in this day and age is widely considered offensive?

Is Schill even tangentially aware of how many oddballs, weirdos and antisocial people fill the ranks of the academy, and he’s warning everyone about the danger of a well-meaning professor who is simply not aware of one racist stereotype?

He then goes on to dismiss all criticism toward UO because it’s not like UO is going to punish all professors for their speech:

Some commentators have taken to the barricades, and suggested that any finding or action taken with respect to Professor Shurtz will ultimately open the door to firing professors for expressing their political views. Really? In law, we call this the “slippery slope” argument or “the parade of horribles.” While I have tossed and turned for nights over the fact that the university found that a professor’s expressive conduct constituted harassment, I think the reaction of those commentators is overly dramatic and not supported by anything that took place in this case. Go online and you will find that Professor Shurtz remains a member of the law school faculty. Name a single faculty member who has been punished by the provost for his or her political views. This has not happened and you have my vow it won’t happen as long as I occupy my office in Johnson Hall.

The best answer to Schill’s facile argument comes from Conor Friedersdorf of The Atlantic, who faced similar criticism from a Stanford professor who accused him of exaggerating campus censorship and intolerance for diverse viewpoints.

In response, Friedersdorf wrote an unrepentant defense of “fighting attacks on free speech early and often,” even if they are the exception rather than the rule in academic settings:

This type of skeptic [Stanford Prof. Keith Humphreys] is a scourge of civil libertarians. Though they may value the same goods in the abstract, they have a bankrupt understanding of how civil rights, liberties, and key norms must be defended in the particular if they are to endure. …

It doesn’t make much sense to wait until a civil right or settled norm is attacked so pervasively that a large portion of the population has suffered harm before defending it. I’d prefer to protect the vulnerable individuals or groups first affected—what Humphreys calls “the fringe”–and thereby preempt pervasive harm.

The free-speech rights that Americans enjoy today are ours precisely because organizations like the ACLU have spent decades “sampling the fringe” and filing lawsuits adjudicating edge cases on behalf of the victims, often precisely because they are suffering from discriminatory treatment that is atypical and unrepresentative. The Foundation for Individual Rights in Education is doing that work today. It does so in part because it understands that enforcing speech restrictions against a very few people can invisibly chill the speech of a much larger class. One or two firings may be enough to convince many professors to watch what they say; no faculty waits for a wholesale purge before they begin to self-censor.

Consider that any speech infringement by the University of California System – a recurring offender – still affects 238,000 students and 190,000 faculty and staff, and it’s perpetrated by a taxpayer-funded institution overseen by elected officials, Friedersdorf says:

When the UC system infringes on free speech, it has enormous ramifications, even if a randomly selected sample of other colleges is doing much better.

In a section that could have been a direct response to Schill’s pitiful mockery of “slippery slope” arguments, Friedersdorf says:

I’m as flabbergasted by the same logic when I suggest that the Espionage Act ought to be repealed, to spare us future mischief from an abusive president, only to be told, as if in defense of that law, that it has scarcely been used across the century since its passage. The speech codes of the 1990s were not regularly enforced, but that wasn’t any solace to the students who were actually punished, a disproportionate share of whom were African American. Critics like Henry Louis Gates and the courts that struck down those laws were right to challenge them, though they were seldom used. …

What galls me, whether the subject is police abuses or anti-Muslim animus or professional-licensing laws, is when folks are given clear evidence of actual injustices, but dismiss their magnitude, then go a step farther, as if the right course is to treat those who are more concerned than they are as if they’re the problem.

Lawyer Ken White of Popehat, a former federal prosecutor, directly responded to Schill’s argument, saying it “promotes confusion and ignorance of free speech legal norms in a way unbecoming to a law professor”:

The problem is the complete abandonment of an objective standard and the uncritical embrace of a subjective standard that yields without question to the heckler’s-veto-prone assertion of offense. Under this standard — the one that President Schill defends — whether something is harassment and can be punished, and whether a professor’s right to speech is outweighed by some notion of public good, depends entirely on how listeners choose to react. Not all students or faculty are intolerant, censorious martinets. But the loudest ones are, and the University of Oregon has decided to defer to them. The University has decided that the people devoted to the idea that ideas and speech they don’t like are harassment should determine which speech should be punished, based on the fervor of their reaction.

So don’t worry, you other UO faculty!

The university probably won’t punish you, as long as you find out what will really set off every student and colleague, and just avoid saying or doing that thing around them, every time you see them.

Consider it part of your “shared governance” with the administration.