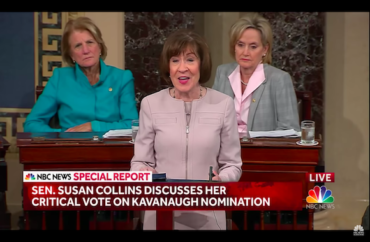 A campus official has said St. Lawrence University will not revoke the honor in the wake of alumni and faculty complaints

Sen. Susan Collins delivered an extensive and thoughtful rationale on the Senate floor for why she decided to cast a deciding vote to confirm Brett Kavanaugh to the U.S. Supreme Court. But this wasn’t enough for alumni from her alma mater, St. Lawrence University in upstate New York, who have asked the school rescind her 2017 honorary degree because of the vote.

A letter accuses the Republican senator from Maine of not being “in line with the core values of St. Lawrence University and the commitments of its faculty, students, and staff.”

It initially praises her for voting to prevent the repeal of the Affordable Care Act in 2017, when she was given the honorary degree by the school. It then criticizes her as not possessing “the integrity and commitment to justice that we expect from the St. Lawrence body.”

“We ask that the University revoke this honorary degree as we find that she is not deserving of it in the face of her recent actions,” it reads. “We ask the university to do this in support of truth and for all of the victims of sexual assault and violence, of which many of her fellow alumni and students have suffered.”

The letter is co-signed by more than 1,300 alums, CBS News reports.

The statement concludes, in part:

We support the alumni call to rescind Senator Collins’ honorary Doctor of Humane Letters. But, more importantly, we would like to see the university– faculty, staff, administrators, and trustees–take real action, in partnership with alumni and current students, to dismantle the rape culture on our campus, a culture that no doubt influenced the actions Senator Collins took during the Kavanaugh hearings and that we find in violation of the principles in the faculty statement, principles which were supported by the Board of Trustees and Senator Collins herself.

A university official said there are no current plans to rescind the degree, according to CBS News.

“Throughout its long history, St. Lawrence University has never rescinded any earned or honorary degree, and it has no intention of doing so in this situation,” the spokesman said.