Yet oddly, ‘society becomes more liberal’ as a result

Do you want to lose the battle but win the war? Then run on a political platform of combating “white privilege.”

A new research paper, published on the psychology preprint server PsyArXiv, finds a strange divergence between voter support and social attitudes in response to politicians talking about white privilege.

The research team surveyed a representative sample of white Americans to “test the effect” of a Democratic candidate in “arguing for programs designed to help blacks and declaring the significance of white privilege in American life.” They used Kirsten Gillibrand of New York (below), one of the biggest flip-floppers in the U.S. Senate.

“Recent years have seen liberals moving sharply to the left on issues related to race and gender, the so-called ‘Great Awokening,'” begins the paper, written by academics from Columbia University, the University of Alabama and University of London.

But while liberals pay a political price for that shift, they appear to make societal gains for their views: Discussing white privilege “may decrease some aspects of white identity among conservatives.” 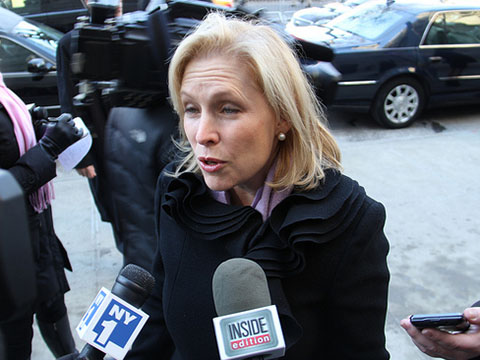 Giving survey respondents the “treatment” where Gillibrand talks about white privilege, reparations and affirmative action led to a change of “one standard deviation or one point shift to the right on a five-point ideological scale,” he said.

Yet whites “actually became more liberal” on reparations even as they marked down this politician for emphasizing the subject. Hanania suspects that conservatives are staying in place while “other Americans come to embrace racial liberalism,” the result of Gillibrand moving “the Overton window” (the range of policies that are “widely accepted” in American life).

“We argue that our findings can explain some seemingly contradictory macro-trends in public opinion,” Hanania wrote: “We’re more polarized than ever on party, but on identity issues conservatives are not actually moving to the right. Polarization remains, but society becomes more liberal.”

He notes that conservative activist Pat Buchanan, a precursor to the nationalist strain in today’s Republican politics, warned about this trend more than 40 years ago.

The findings suggest that the progressive activist base “is willing to sacrifice short-term political gain for long-term societal change” on issues such as race.

For several decades, conservatives have been winning elections but losing badly on social issues. Pat Buchanan wrote a book called "Conservative Votes, Liberal Victories" back in 1975, and Republicans have had control in Washington more often than not since. 9/n

Members of the right have a similar choice they can make now: Cede the electoral advantage they built over the past decade in order to argue more boldly for their vision of America, or keep winning elections while losing the broader argument.