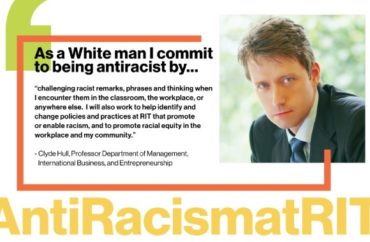 When the feds are investigating you for Title IX violations in 15 female-only programs, do you think it’s a good idea to brag about how you’re singling out men for public shaming?

The Rochester Institute of Technology launched a campaign this month to pressure white men to pledge their devotion to “antiracism.”

It’s drawing an amused reaction from Mark Perry, the University of Michigan-Flint economist who files Title IX complaints against female-only programs as a hobby.

He told The College Fix that “at the same time RIT is virtue-signaling its social justice wokeness on Twitter, it’s under federal investigations” by the Department of Education for “single-sex, female-only programs that illegally violate the civil rights of male students and faculty based on their sex.”

The #AntiRacismatRIT campaign highlights white males who are “taking steps to be actively antiracist in their lives.” Each tweet begins “As a White man I commit to being antiracist by …”

Grant Cos, journalism program director, commits himself to “take responsibility for my own biased assertions” and cheerfully submit to diversity workshops “on and off campus” (!). Staff member Aaron Gorelick confesses his racism, by which he means actions that have a negative “impact,” not his “intentions.”

To eradicate racism, we need to be action-oriented. In August, w/ @RITDiversity, we’re showing how white men at #RIT are taking steps to be actively antiracist in their lives. Today's statement comes from Grant Cos, professor in the School of Communication. #AntiRacismatRIT /1 pic.twitter.com/uytpjf83Hw

Chemistry Prof. Christopher Collison pledges to preach to “students, friends and family members” that “neutrality” is a tool of “white privilege in our society of inherited systemic racism.” (Remember that antiracism scripture explicitly promotes racism against whites.)

To eradicate racism, we need to be action-oriented. In August, w/ @RITDiversity, we’re showing how white men at #RIT are taking steps to be actively antiracist in their lives. Today's statement comes from Prof. Christopher J. Collison. #AntiRacismatRIT /1 pic.twitter.com/IH4kJBqQRy

Management Prof. Clyde Hull practically begs for a discrimination investigation by implying he will grade down students for whatever he deems “racist remarks, phrases and thinking.” Count on that to include skepticism toward affirmative action, criticism of the Black Lives Matter movement or utterances such as “America is a land of opportunity.”

This is the Bizarro world of antiracism, which universities enforce at their own legal peril.

To eradicate racism, we need to be action-oriented. In August, w/ @RITDiversity, we’re showing how white men at #RIT are taking steps to be actively antiracist in their lives. Today's statement comes from Professor Clyde Hull. #AntiracismatRIT /1 pic.twitter.com/fpXNLiSRIK

Perry rhetorically asked The Fix why white females – the original Karens! – weren’t included in this campaign to shame people for their skin color, which further reinforces RIT’s ongoing denigration of men.

He provided documentation from the New York division of the Office for Civil Rights regarding its ongoing investigation of the RIT programs he has reported – largely relating to female-only STEM opportunities –  going back to December 2018.

It told Perry just last week that it was adding three programs from his subsequent complaint to its investigation of a dozen programs that it opened a year ago.

RIT may be more worried about its own community’s response to the #AntiRacistatRIT campaign than the federal investigations, which tend to end quietly, with colleges ending or opening up their female-only programs.

“As a concerned citizen, bridge builder, and a Black man, it is true that we must center Black and other voices of color immediately and more often,” he wrote, then flipped the narrative to a familiar woke talking point:

It is also true that centering too much puts the burden on communities of color to instruct or do the important work of change. …

This focus on inviting and engaging White men on our campus is critical to realizing an anti-racist environment. Too often white men, as a group, aren’t involved in these critical conversations or attend trainings available to them. Too often, our young white men only have role models of hate rather than ones of accountability. It is not designed to give them a participation sticker or tell people of color how to lead.

Mentioned nowhere in his blog post: why the university let white women off the hook. Perhaps it will have to answer to federal regulators yet again – for creating a “hostile environment” for one sex and race.