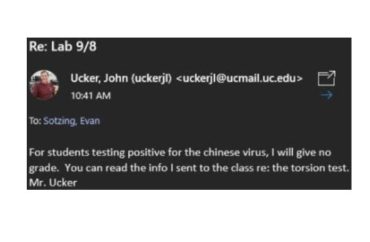 Cited for not accommodating a medical condition

The University of Cincinnati refuses to say if John Ucker, an engineering professor, will return to the classroom this upcoming semester.

The public university placed Ucker on leave in September after he referred to COVID-19 as the Chinese virus in an email to a student.

The engineering professor “will remain on leave for the rest of the semester at least,” The Enquirer, a Cincinnati paper in the USA Today network, reported in November.

Ucker does not show up in the public university’s course catalog for the spring semester as of a search on December 28 though he remains on the university website. 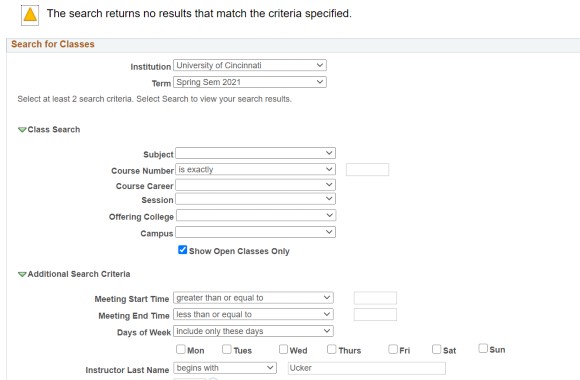 The College Fix reached out to John Bach, the school’s media relations director, and asked if Ucker would return to the classroom in the spring.

Ucker also did not respond to multiplied emailed requests for comment over the past two weeks asking for comment on his situation.

The Enquirer reported that the Dean of the College of Engineering and Applied Science, John Weidner, said the school’s Office of Equal Opportunity & Access found Ucker guilty of violating policies on accommodating students with medical conditions.

Student Evan Sotzing accused Ucker of failing to accommodate him during his quarantine after his girlfriend tested positive for coronavirus, though Sotzing later said that Ucker never gave him a zero on assignments he missed due to the quarantine.

“For students testing positive for the chinese virus [sic], I will give no grade,” Ucker wrote in early September in response to Sotzing’s email.

“My girlfriend tested positive for COVID and the University of Cincinnati’s Health Department instructed me to not attend my in-person lab,” Sotzing tweeted. “Not only did my professor give me a zero for not going, but this was his response” the student said and then posted a screenshot of the email.

My girlfriend tested positive for COVID and the University of Cincinnati's Health Department instructed me to not attend my in-person lab. Not only did my professor give me a zero for not going, but this was his response: pic.twitter.com/WYlbi5apdi

However, Sotzing never received a zero on the lab assignment, according to comments Weidner made in the fall.

The Fix reached out to Weidner asking for a copy of the investigation report and for an update on Ucker’s teaching role in the spring but did not receive a response to multiplied emailed requests in the past two weeks.

The engineering professor is not the only faculty member to face scrutiny for his coronavirus terminology.

Syracuse University placed Jon Zubieta, a chemistry professor, on leave for using the term “Wuhan Flu” and “Chinese Communist Party Virus” in reference to coronavirus in his syllabus in the fall.