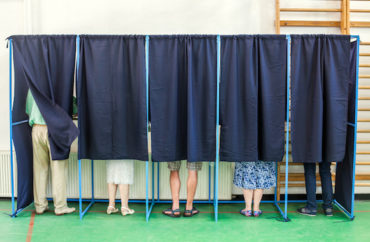 ‘High-energy, nonpartisan creative campaign’ tries to get out the vote

A class at the University of Michigan this semester is looking to generate voter turnout by styling the act of voting as “sexy,” with a “troupe of artists, designers, performers, and passionates” attempting to “make voting irresistible” through a campaign in the university’s art school.

“Voting is Sexy,” a course offered through the University of Michigan’s Stamps School of Art & Design, is spearheading a “high-energy, nonpartisan creative campaign” this fall in order to entice voters to the polls.

Stephanie Rowden, an associate professor at the university and one of the instructors of the class, told local station WWJ News Radio that students in the class will be “working on rebranding the experience of mid-term voting.”

Reached via email by The College Fix, Rowden said the students in the course will work to “encourage greater college age voter participation among their peers.”

“Our students will be using their creative energy, skills (and humor!) to help their peers learn about voter registration, voting resources and the voting process,” Rowden said.

Rowden provided The Fix with links to material the class has already released, including an informational video and a poster.

Asked what students in the course will do for the remainder of the semester after the election is over, Rowden said the class will continue.

“After the election, students will finish out the semester project by analyzing and reflecting on the range of their efforts to communicate information to their peers about voter registration and the voting process,” she told The Fix.

According to the course listing, the class will be worth three credit hours.

“Voting is Sexy” isn’t the only college project meant to increase voter turnout in elections. The Big Ten Voting Challenge, an effort put on by the universities in the Big Ten Conference, “aims to register students to vote and encourage them to go to the polls.”

According to the challenge’s description, following the 2018 midterms, “trophies will be giving to two universities; one for having the highest eligible voter turnout and the other for being most improved.”

The University of Michigan is part of the Big Ten Conference. Last year Mark Schlissel, the president of the university, urged students at the school to vote. “Our democracy thrives best when all voices are represented, and students can play an integral role in shaping our collective future,” he wrote.

MORE: Academics advocate a challenge to the 2016 presidential election vote