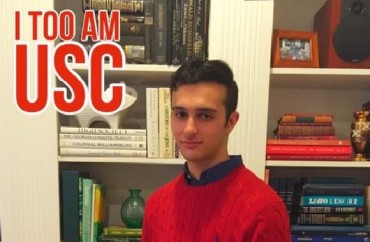 USC College Republicans president also bullied online for his meme: ‘I fight on because I am tired of getting weird looks for saying that I am a Republican and that I love my country’

USC College Republicans in their closed Facebook group recently discussed a new campus organization “I Too Am USC” – and for that they have been called racists and accused of creating the need for “safe spaces.”

“I Too Am USC” is a relatively new university funded initiative that aims to “create a safe space for all marginalized communities on campus through the sharing of student experiences.” Their social media posts include testimonials that paint the private Southern California campus, which charges nearly $50,000 a year in tuition and fees, as steeped in racism.

The activists recently suggested some of the College Republicans’ private Facebook posts critical of “I Too Am USC” were bigoted, white-privileged rants, and one commenter said about the USC College Republicans president: “Sounds like little man needs a couple weedgies and a few slaps upside the head.”

Jacob Ellenhorn, president of the USC College Republicans, said he sees hypocrisy in that response.

“All these groups talk about how inclusive they want to be, but most of the time the only one who feels unsafe is me,” he told The College Fix in an interview. “There is all this talk about creating safe places for people to express themselves, but if you have an opinion different than them, you are not allowed.”

“If they want to speak out for minorities, and indeed minorities need representation, why not make room for intellectual diversity on campus, as well?” he added. “Minority student populations are not limited to skin color or sexual identity. I too am a minority because I have a different opinion.”

“I Too Am USC” recently took issue with a post from mid-May.

Ellenhorn had started a discussion in the closed USC College Republicans Facebook group about the “I Too Am USC” page. He called it dumb, and in a comment posted his own “I Too Am USC” meme: “I fight on because I am tired of getting weird looks for saying that I am a Republican and that I love my country.” (“Fight on” is the school’s sports mantra). Ellenhorn’s post prompted reaction, including this one: “LOL, this is getting ridiculous. You’d think these ‘minorities’ live under ISIS or something.” The “I Too Am USC” page somehow acquired screenshots of the discussion and posted it on their public page late last week: “We are gracefully sipping our tea this morning as our peers, our fellow Trojan ‘Family,’ provide us with more reasons why we need a safe space.” Although Ellenhorn’s name was redacted he is easily identifiable, especially as a USC student government senator. After the post was shared, immediate bullying ensued.

“I find this extremely hypocritical,” Ellenhorn said. “They are entitled to a ‘safe space’ yet I am the one they are attacking and consequently I hardly feel safe. These social activists are creating a narrative for me that paints me as a bigot, a racist, and of course, a sexist. This type of manipulation to keep people like me from voicing a different opinion is in itself an act of outrageous bigotry. This tendency to silence dissenters is essentially the beginnings of tyranny.”

The 20-year-old communication major said it’s even more ironic how he has been targeted by those calling for “safe spaces” given his family’s history – his grandfather graduated from USC in 1944 and then graduated from its Medical School in 1948. At that time, USC had a Jewish quota in the Medical School, and only allowed three Jews in each class, according to Ellenhorn.