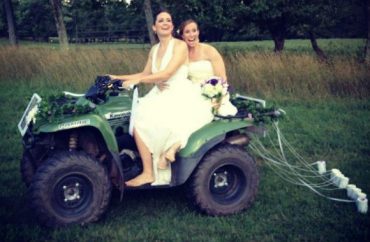 It’s tough being gay and living in rural areas – or so says the U.S. Department of Agriculture (USDA).

That’s why the agency known for grading your beef is teaming up with LGBT groups and Drake University’s law school to host an “LGBT Rural Summit” on Thursday.

#RuralPride Campaign: LGBT Rural Summit Series is part of an effort by the USDA, the National Center for Lesbian Rights and the True Colors Fund – an LGBT homelessness group started by singer Cyndi Lauper – to reach out to LGBT people who live in rural areas.

Agriculture Secretary Tom Vilsack will be the keynote speaker, according to a press release by the law school. Other speakers will include university employee Matt Russell, of Drake’s Agricultural Law Center, whose experience includes farming with his husband.

The press release says that participants will learn about “programs and services that exist to protect, promote, and strengthen LGBT members of rural communities. Issues related to housing, education, healthcare, youth empowerment, and more will be discussed.”

Drake University deferred questions to a media contact at the USDA, but the agency did not return multiple emails from The College Fix.

A USDA employee took a phone message from The Fix for the agency’s listed contact, White House liaison Ashlee Davis, but neither Davis nor any other person returned the call. That employee said that Davis, who was previously special assistant to the assistant secretary for civil rights, is the point person for the operation.

Davis’s LinkedIn page says she used to work on the National Gay and Lesbian Task Force and for the Equality Federation, where she “Researched and analyzed religious-based bigotry and its influence on civil rights legislation.”

"We've got to love each and every piece of ourselves." Ashlee Davis, White House Liaison @USDA #HollerIfYouHearMe pic.twitter.com/j1f68sCy2g

It is unclear how much the program is costing U.S. taxpayers, although USDA’s Office of Civil Rights, which is coordinating the summits, requested $24.4 million in funding in its fiscal-year 2016 budget request.

The agency appears to have an uneven record when it comes to promotion of LGBT causes. Its website only returns four hits on the search term “LGBT,” including a 2014 post by Davis on LGBT Pride Month and a message from Vilsack for the “It Gets Better” campaign to encourage LGBT youth who feel bullied.

This is at least the 14th summit in the past two years for the agency. On June 2 it hosted a summit in North Carolina. According to BuzzFeed, the campaign started in 2014 with a summit at North Carolina A&T University’s LGBTQ Law Center.

The goal is to help LGBT people sign up for the USDA’s programs, such as food stamps and housing loans, which “strengthen the daily lives of LGBT rural community members,” Buzzfeed reported.

The June 23 summit in California showcased various groups in agriculture that work to promote the LGBT presence in farming. One leader of a group called the Cultivating Change Foundation said it wants to “celebrate” LGBT heroes of agriculture.

“You have lesbian agricultural teachers in your high schools and your colleges teaching youth.  It’s time we start recognizing them but also celebrating them,” Marcus Hollan, a co-founder of the group, told KQED News.