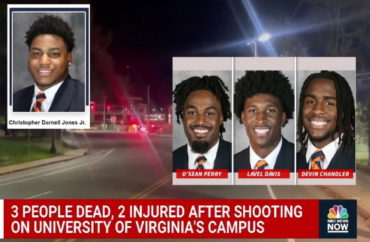 The suspected gunman in a mass shooting Sunday night at the University of Virginia was taken into custody Monday morning as the Charlottesville campus begins mourning three football players allegedly killed by the suspect.

Authorities have yet to release information on a possible motive for the attack. Two others were also injured and are receiving medical treatment, according to a statement released by UVA President Jim Ryan.

The university canceled classes Monday after students had remained under a shelter-in-place order for most of the manhunt for Jones, which lasted through the night and well into Monday morning before he was apprehended.

During the shelter-in-place, students were advised by police to “run, hide, fight.”

UVA UPDATE: Police have the suspect in custody. This is the final alert message.

“This is a message any leader hopes never to have to send, and I am devastated that this violence has visited the University of Virginia,” Ryan stated.

According to WRIC Richmond, the “tragic shooting occurred near the heart of campus, on Culbreth Road, just before 11 p.m.” The news station added:

Jones is … from Petersburg, where he played linebacker and running back at Petersburg High School for his senior year. He also has ties to Henrico County, where he spent his first three years of high school at Varina.

In high school, Jones had success in academics, earning “Student of the Year” twice at Varina. He also earned honorable mention all-conference as a freshman and second-team accolades as a sophomore and junior. Jones was a member of the National Honor Society, National Technical Honor Society, president of Key Club and president of Jobs for Virginia Grads Program.

Jones was a tailback in 2018 but did not play in any games, the university’s website states.

As for the victims, ABC news reports that Davis has been described as “bright, thoughtful and engaging.” He also loved movies and reading Shakespeare and the Bible, according to a video he made for Virginia Football last year.