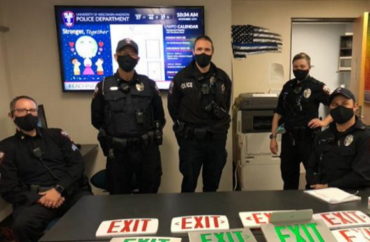 In January, University of Wisconsin-Madison’s Police Chief Kristen Roman banned officers from using any thin blue line imagery while carrying out their duties in an official capacity.

But her spokesman tells The College Fix that Roman has resisted calls for flag “installations” within UWPD offices to be removed.

“At present, the installations remain in place as they are in secure areas of our building not accessible to the general public (thus, they’re not considered a public display),” UWPD spokesman Marc Lovicott said via email.

When Roman first banned use of the thin blue line imagery by on-duty officers, she cited the Jan. 6 insurrection in the U.S. Capitol building and noted the flag has been “co-opted” by extremists.

Roman added “event-specific displays,” such as line-of-duty death observances, may be exempted from the ban.

“I understand that this decision may cause emotional responses, even anger from some,” she wrote. “I, too, feel hurt and disappointed as we confront our current reality. I know this is hard. I know this issue is complicated,” she said.

“I believe we have the capacity to embrace a ‘both/and’ rather than an ‘either/or’ and while stopping short of dismantling our existing installations…we owe it to our community and to ourselves to grapple with the complexity of this issue and consider what degree of divestiture is most valuable for all concerned,” said Roman in her Jan. 26 statement.

Lovicott told The Fix that since the statement was issued, UWPD has held “internal town hall” conversations to continue to explore the “both/and” option.

“One idea we are working on seeks to transform the symbol so that the imagery can be replaced by something else both in terms of physical representation, but also something representative of what we’ve learned through our process with respect to inclusion and service above self,” Lovicott said.

“Our goal is not simply banning or removing — rather, it’s about promoting lasting and meaningful progress. A top-down decision to dismantle these absent such a process doesn’t do the issue justice,” he added.

For decades, the thin blue line flag has been used to show solidarity with police officers. It represents a sign of respect for a dangerous and sometimes deadly profession.

The flag itself made several official appearances at campaign rallies for President Donald Trump, including at an Oct. 24 rally in Waukesha, Wis.

“I certainly feel the weight of the national and local narratives that dominate the headlines depicting all police as white supremacists – a profoundly disturbing sentiment that seems to have gained wider support following last week’s insurrection at the US Capitol during which extremists once again waved thin blue line flags,” Roman said in her statement banning use of the image.

“…I am moved to enact specific measures to distance UWPD from the thin blue line imagery and the fear and mistrust that it currently evokes for too many in our community.”

In November, the UWPD tweeted a humorous image of officers that had caught a group of students stealing exit signs from campus buildings. In the background of the photo, a thin blue line flag is visible on the office wall.

We broke up a theft ring this weekend that clearly had a faulty exit strategy.

This is what happens when you and your roommate attempt to “collect” an exit sign from each residence hall over the last two nights.

But some members of the campus community were not laughing. The department received complaints about the inclusion of the flag in the photo.

On November 17, Roman addressed the complaints in a statement condemning “any usage or depiction” of the imagery “intended to defend hate or to attempt to invalidate social justice movements advocating for meaningful police reform.”

But Roman also noted in that memo that to many within and outside of the police profession, the flag “symbolizes a commitment to public service and the countless selfless sacrifices willingly made to honor that commitment, up to and including laying down one’s own life to protect the lives of others.”

Yet in a sign of things to come, in her November 2020 statement, Roman did not commit to removing the flag in the picture, nor another flag in the Police Department’s main office.

Roman’s defense of the flag did not satisfy campus activists.

“If it does mean different things to different people, and if it means something harmful to someone, then maybe it’s not a good idea to have it up,” Madison BIPOC Coalition cofounder Juliana Bennett said at the time.

University spokeswoman Meredith McGlone in an email to The College Fix on Tuesday that “UW–Madison continues to fully support Chief Roman and the department’s ongoing work protecting our campus community with integrity and professionalism.”