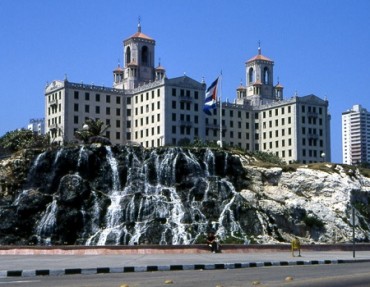 Cuba, once a non-option for travel, is quickly gaining tourists as restrictions on visiting the country are eased. And now, The University of Michigan Alumni Center will follow in the footsteps of several other American universities and embark on an alumni trip to Cuba later this year.

But given that an oppressive government still exists in Cuba today, some are concerned about the appropriateness of the trip—and whether spending tourism dollars in a communist dictatorship is a wise idea.

“The regime needs those dollars like oxygen,” said Jay Nordlinger, senior editor of National Review and a U-M graduate. “I, myself would not choose to vacation in Cuba, or any other totalitarian state.  I would not feel comfortable vacationing in a place whose citizens are forbidden to leave. Voting with your feet—opting to leave—seems the minimum right.”

In the past, Cuba has been known for its “tourism apartheid,” in which tourists and citizens were kept entirely separate.  While this practice has been relaxed in recent years, Cuba remains an oppressive place to live for the average Cuban.

“Cuba is a one-party dictatorship with a gulag,” said Nordlinger. “It has been this way for more than 50 years.  There is no dissent allowed, no freedom.”

While the planned trip has upset some critics of the Cuban government, others believe contact between Cuban citizens and American tourists would be beneficial.

Pedraza, who was born and raised in Cuba, said the Cuban government shouldn’t monitor the trip.

“If the trip consists of just visiting with government officials or those artists and intellectuals chosen by government officials, it will not benefit anyone too much–neither the Cuban people nor the Michigan alumni,” she said. “If the Michigan alumni make an effort to get out of the beaten path and meet the real Cuban people and they try to understand their lives, then a positive exchange will have taken place.”

The itinerary for the trip is available on the Alumni Center website. The alumni will travel to Havana, Cojimar, and Cienfuegos, three of the larger cities in the country. They will be exposed to Cuban artists and citizens in each of their destinations.

In 2003, President George W. Bush eliminated licenses to travel to Cuba, but those restrictions were lifted by President Obama. Prestigious universities, including the University of California Los Angeles and Harvard University, have since visited the country.

U-M’s selection of Cuba was due in part to the eased travel restrictions, but also because university alumni had asked about the possibility, said Carrie Fediuk, Travel Program Manager for the Alumni Center.

When it comes to making travel plans, the U-M Alumni Center holds itself to a three-pillar system consisting of “camaraderie, life-long learning, and global awareness,” said Fediuk. According to her, the trip fits the bill and “is not politically motivated.”

The Alumni Center puts on about 50 trips around the world each year, usually to places outside the United States. The point of these trips, said Fediuk, is cultural immersion.

“These are sophisticated travelers dedicated to learning,” she said.

Despite the eased restrictions, it is still difficult for Americans to plan trips to Cuba. Programs like the Alumni Center must apply to the U.S. government for a travel license. Only experienced programs are approved. It is necessary to be explicit about the purpose of the trip as well as the exact number of people traveling, because the Cuban government wants a specific ratio of visitors to Cuban citizens. Feduik believes this policy is in place because it allows for the best interaction and deepest immersion within Cuba.

Despite some negative opinions about the appropriateness of an American university vacationing in Cuba, the Alumni Center has two trips planned in 2012 and a possible third in the works. Whether or not U-M alumni will be immersed in true Cuban culture—or a government-approved version of it—remains to be seen.

Fix contributor Stephanie Wang is a student at the University of Michigan.