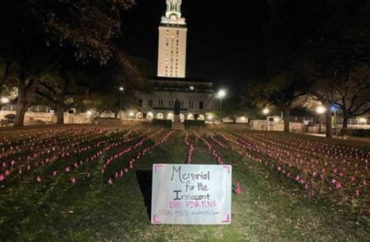 After the Young Conservatives of Texas put up some 1,000 tiny pink flags on a lawn at the University of Texas at Austin to memorialize abortion deaths, vandals removed them within twelve hours time.

According to KVUE, members of the YCT said they have a couple of leads, including someone who had “mocked the display” in a Twitter post, and another who admitted on Reddit to removing the flags.

The Daily Wire notes each of the flags had represented approximately 800 of the unborn children who are aborted every year.

Last night, we @yct planted 1,000 flags on the south lawn to memorialize the hundreds of thousands of unborn humans lost to abortion every year. Be sure to check out our memorial before it’s too late. pic.twitter.com/JgJKxZBL6V

YCT-UT Chairman Jordan Clements said “All these leftists proved is that abortion kills more than a clump of cells. They know deep down that it is human life being killed on the altar of convenience in our throwaway culture …”

In a statement to The Daily Wire, UT spokesman J.B. Bird said

The university strongly defends freedom of expression and has content-neutral processes protecting free speech activities […] Outdoor areas are open to the public, and free speech activities, such as demonstrations, do not require university approval. Students and student organizations can apply through the Dean of Students’ Office to put up outdoor displays and exhibits.”

The office has not had any students reach out about this exhibit, and we do not have information as of this evening about whether or how it was put up or taken down […] If any students have concerns, we encourage them to contact the Dean of Students’ Office for help.

Also in 2019, the Christian(!) Rocky Mountain College would not even allow the construction of a pro-life display: crosses to honor abortion victims.