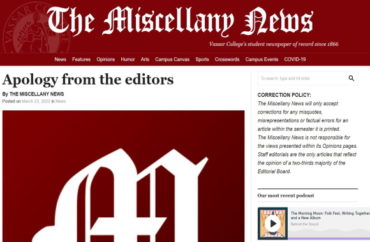 The Vassar College student newspaper deleted a news article because the reporter covering the story included too many quotes from white students.

In a March 23 column, the paper’s editors apologized for the original story, which ran in mid-February.

“In prioritizing urgency over thoroughness, we made misguided and insensitive oversights with whom we were representing in the article and failed to provide in-depth reporting of the issue at large,” wrote The Miscellany News’ editors.

“The majority of our quotations came from white students and therefore we reduced the positions of students of color to a singular, tokenized perspective. After this was brought to our attention, the paper decided to remove the article online in an attempt to prevent further harm among the communities we misrepresented.”

In the column, the editors do not explain what harm students suffered as a result of the story. Newspaper editor-in-chief Janet Song did not respond to an email from The College Fix seeking comment.

Johnson, who is black, was accused by some students of committing “war crimes” for enforcing immigration laws on the U.S. southern border.

Calling immigration a “difficult and painful issue,” Johnson, who served during the second Obama administration, withdrew as a speaker on February 14.

“On my watch, the number of deportations from our country went down, the percentage of those deported who were convicted of serious offenses went up, and the number of young people enrolled in DACA went up,” said Johnson in a statement published in the Miscellany News.

“Whether immigration, border security or national security, leaders with a sense of humanity are often faced with less than perfect choices, sometimes nothing but ugly choices, but we always try to do the right thing.”

Johnson’s father was a professor of architecture at Vassar for nearly four decades. He retired in 2001.

After Johnson’s announcement, the paper ran a story that they now claim failed to represent enough minority voices.

“Our article exemplifies many of the institutional flaws and structural problems within our paper,” the editors wrote, adding:

“Journalism, including college journalism, has historically been a white-centric, often elitist field, and The Miscellany News is not immune to the consequences of these structures. The publication of the article and its subsequent removal reminds us of the systemic issues our members are implicated in, as well as the privilege and lack of diversity that we have allowed to persist for generations across our boards. None of our explanations for the failures of an individual article can mitigate the problem of past coverage on issues related to people of color, nor address in full depth the issue of representation within our board.”

Nora Paul, director of the University of Minnesota Journalism Center, told The College Fix in an email that erasing the story entirely amounted to “etch-a-sketch journalism,” in that it was “published then disappeared.”

“A great example of the need to report equitably on racially sensitive issues – and what happens if you don’t – has been erased,” Paul said.

Paul, the former Information Services Editor at the Miami Herald, said common journalistic practice is to keep the offending article online but append an explanatory note.

“Publication is publication – good, bad or ugly,” she said. “We would often have reporters ask that we amend stories in the archive to reflect, as one reporter said, ‘what I wrote before the butcher got to it.’ We wouldn’t, of course. The archive reflected publication history.”

She noted the paper would, however, add a correction note to the original story if there were clear errors: “But we would never change the original text.”

“In this case the editorial should run with the original story attached and vice versa,” she said. “Canceling may feel righteous but it is disingenuous. It did happen, it was reported, it was published, it should be on the record – for good or ill.”

MORE: Vassar official shreds the Constitution — literally — due to its ‘triggering’ nature