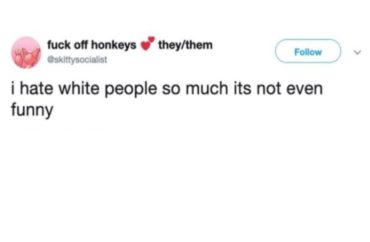 The student body president of Virginia Commonwealth University has posted on social media that she hates white people and advocates for cop killing, according to screenshots of the comments published by the Post Millennial.

Taylor Marie Maloney, 20, “was championed earlier this month by the ACLU of Virginia for being the ‘first openly transgender and non-binary person’ elected to the position. But social media posts written by the communist activist have since surfaced showing their advocacy for killing cops, rioting, looting, vandalism and hatred of white people,” the Post Millennial reports.

Some of her comments include: “ur reminder to advocate for k*lling of k*ps,” “riot, riot, riot,” and “i hate white people so much its not even funny.”

Journalist Andy Ngo, who reported the story, pointed out on Twitter that after a black nationalist rammed his vehicle in an attack on the Capitol building, killing one officer, Maloney’s social media comment in response was: “love this we need more of this.”

When a black nationalist launched an attack on the Capitol building, killing one officer, the student body president of Virginia Commonwealth University @VCU responded: "love this we need more of this." Read my report about violent extremist Taylor Maloney:https://t.co/48GuqfVSw3 pic.twitter.com/KX6s5qSfm6

The VCU student newspaper, the Commonwealth Times, reports that Maloney was arrested in late July 2020 during an anti-police protest. In September 2020, the student government president led a march against police after the grand jury decision in the Breonna Taylor case came in.

Maloney, a senior at VCU majoring in politics and government, said when she took the helm of the student government that the university “has been a product of and sustained by Black death” and that her fight “is — and always has been — a fight to liberation,” the Times reported. 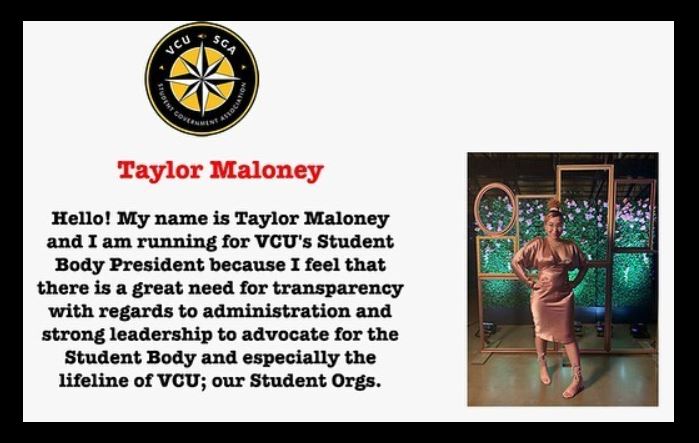 The Post Millennial reports Maloney is also an organizer for the Virginia Student Power Network, “a network of self-described radical college students across the state.”