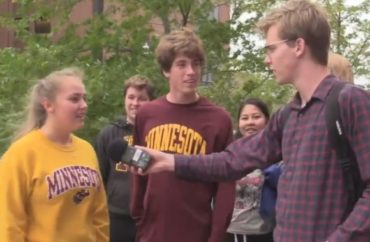 MINNEAPOLIS — Most students questioned on two Minnesota campuses recently would like to see President Donald Trump impeached, but when it comes to holding their own U.S. Rep. Ilhan Omar accountable for her actions, impeachment is off the table.

Over the weekend, The College Fix visited the University of Minnesota and Augsburg University, two Minneapolis campuses inside Omar’s Congressional district. Most students at both schools immediately responded in the affirmative when asked whether they support impeaching Trump.

But when asked about the various improprieties that plague Omar, students replied that they do not support impeaching her, didn’t have enough information, or didn’t even know who she is.

One student who said she would support impeaching Omar if she was found guilty of a crime was then talked out of it by her peer, who said the Congresswoman should be given a pass because “she’s for the people.”