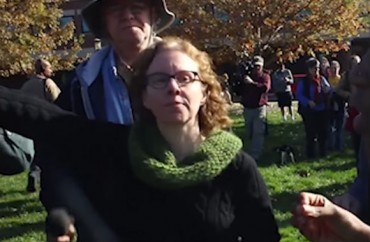 Instructed protesters ‘Do not talk to the press’

The University of Missouri communication professor who was fired this month for her role in fighting with student journalists at a racial protest in November has denied her actions then represented a pattern.

A new documentary film made by Mizzou students, however, undermines multiple claims by Melissa Click that her actions toward one student journalist were an isolated incident.

It even shows that Click instructed protesters to avoid the media.

The student filmmakers were given special access to the racial protest group Concerned Student 1950, whom Click was defending, and they reveal that the professor’s trouble with the media began just minutes after System President Tim Wolfe stepped down.

The footage shows Click laying her hand on an unidentified reporter’s video camera to prevent him from filming group member Andrea Fulgiam after she addressed the crowd. The reporter reacts, grasping Click’s arm down forcefully. Another unidentified reporter, working with the first, scowls at Click. “We all have rights,” says the second reporter.

Click escorts Fulgiam away from the reporters, shouting “Do not talk to the press.”

Nothing about lead-up to confrontation made it into report

Though Click’s statements to university investigators in February acknowledged this incident, whatever information she might have given them about the lead-up to the confrontation did not appear in the university-commissioned report released later that month – making it appear as though the attack was unprovoked.

The report said that Click was asked “whether she had been physically struck by any member of the media” at the protest. “Professor Click told us that at that time a cameraman grabbed her arm and ‘growled’ at her,” but she “did not consider it a ‘big deal’, and did not call law enforcement at the time.” Click said she told the media that “students did not want to make statements to them,” the report said.

The film Concerned Student 1950 was released Tuesday by Field of Vision, the visual journalism wing of The Intercept, which acquired it from three student filmmakers who were granted exclusive access to protesters in the wake of graduate student Jonathan Butler’s hunger strike against Wolfe, The Columbia Tribune reported.

‘The day was a really busy one’

The footage appears to contradict Click’s claims in earlier interviews.

Asked in a Feb. 10 interview with ABC-17 whether she had another encounter with a journalist on Nov. 9 when Wolfe stepped down, Click left herself wiggle room.

Told that the journalist she is known to have manhandled “saw you hitting other people’s cameras,” Click responded: “The day was a really busy one with lots of things going on. I don’t know how [the journalist] could say that and I don’t know what evidence he has to prove that.”

In an interview days later with USA Today, Click characterized her actions on the quad as “one moment,” saying, “I don’t think one mistake should be the end of a career.”