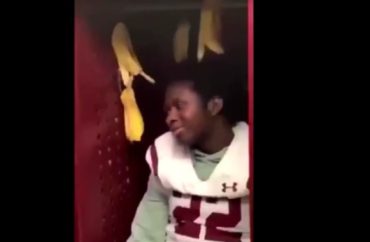 Police detectives in Moline, an Illinois city near the Iowa border, have turned over the results of their investigation into a hazing incident to the Rock Island County Juvenile Division prosecutors. Prosecutors are now considering charges in the case.

But the black student involved in the hazing incident doesn’t want the investigation to go further — and some of the alleged perpetrators, if not all, are black, or at least racial minorities.

A video that circulated on social media this weekend shows a black football player “sitting down in a locker littered with banana peels after a teammate threatens to break his knees if he doesn’t comply,” NBC News reported along with the Associated Press.

NBC News does not name the student or include a video of the incident, but the Moline High School student appears to be a running back and defensive back on the team named Abdoul Nimonika Gountandi, based on the varsity roster for the football team.

Athletes can be heard cheering and the student appears to be smirking during the incident, which appears to have been posted on Facebook and has been shared on Twitter.

Police Chief Darren Gault said the investigation concluded the perpetrators were “of both different and similar races to the victim,” and called it a “racist incident.”

However, the superintendent of the schools said the athletes are friends and that there is no acrimony, according to comments covered by KWQC. She also said all the students involved “were all of color.”

While it is understood that the context of the behavior plays a vital role, that the students involved were all of color, that they are friends, and admitted to joking around, but it also highlights a greater calling from all of us, adults and students alike, to ensure we as a community and district are doing all we can to coach and guide our youth in a way that encourages respectful and accepting treatment of all in and out of the classroom, on and off the field, and inside and outside of our schools.

A school investigation is ongoing.

Gountandi released comments through the prosecutor’s office. He said he is “fine” and asked people to “stop talking about the incident and video.”

“I understand everyone wants justice for me and they want what they think is right to be done,” the athlete said, “but I already made my feelings known to the police and my friends about how I feel about everything.”

“I love the football team I’m on and they’re good guys. I know that personally. I talked to the people involved individually and they apologized,” Gountandi said.

“Lastly, I want to get my life back together, and my student-athlete life back on track, so if you do ever see me or know who I am, treat me as a human first, not a victim,” the student said.

Editor’s note: The article has been updated to reflect that the students may not all be black but seem to all be racial minorities.