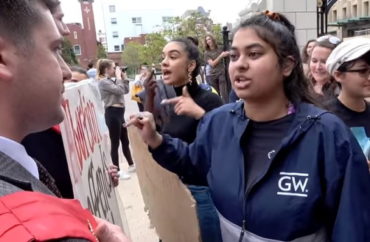 Police called in as crowd gets wild

A pro-life display set up across the street from George Washington University prompted a massive counter-protest among apparent students who screamed, swore, spit — and even twerked — at the half-dozen Catholic activists who held a large banner that read “Pray & Act to End the Sin of Abortion” and engaged passersby in debate.

A 10-minute video posted by the pro-life activists, members of TFP Student Action, a national proactive network of Catholics, shows that what started as a relatively quiet and peaceful demonstration eventually prompted a frenzied response as more and more young people appeared triggered by their presence and launched a counter-protest.

The incident unfolded on September 30 on the public sidewalk outside the private university’s campus community center. A news release published by TFP Student Action on Monday stated that three of the pro-life activists experienced some form of physical altercation with the counter-protesters, such as being spit on or having liquid thrown at them, and the video backs up the claims.

The video shows several one-on-one debates between the students and the pro-lifers that remained tense but civil. A few on the video also came out to support the pro-life demonstration. Later, the crowd swelled. Several told the pro-life demonstrators to leave. There was also dancing and chants, such as “my body my choice” and a song that repeatedly included the phrase “f*ck you.” Another chant the crowd used was: “Pro-life, that’s a lie — you don’t care if women die.”

Toward the end of the video, it shows some counter protesters began to sort of get in the face of the pro-lifers. One young man repeatedly yelled “f*ck you.” Others took issue with the bagpipes the TFP Student Action members played.

“In the age of social media overload, the bagpipes are extremely effective at capturing people’s attention and breaking the barrier of indifference,” Ritchie told The College Fix via email on Tuesday. “The music is patriotic. And it’s also a force multiplier. Students can hear them across campus. They spark curiosity and interest. That’s why we frequently like to play the bagpipes — it draws attention to the noble cause we’re fighting for.”

At the end of the video, it shows the crowd uproariously cheer — and one student break out in apparent celebration twerking after holding her two middle fingers up in the air — as the pro-life demonstrators get in their van and leave under the watch of officers.

The College Fix asked Ritchie about its all-male team of activists, as one of the biggest complaints among the crowd was that the male pro-lifers did not have the right to speak for women.

“Although we promote activities for the whole family, our core team of volunteers is for men,” he told The Fix via email. “We strive to live the virtues and spirit of Catholic chivalry. … Since the deliberate killing of the unborn is both unjust and morally evil, we must stand up and speak out. Real men will always defend the right to life of the unborn.”

MORE: How long does a pro-traditional marriage sign last on campus? 5 minutes.