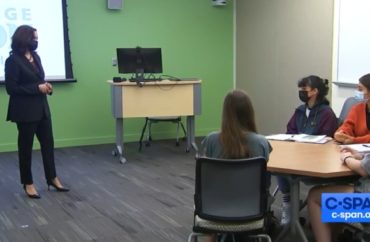 ‘Your truth cannot be suppressed’

The VP spoke at the Virginia university as part of National Voter Registration Day.

The student, who introduces herself as Jude, said she is part-Yemeni, part-Iranian and “not American,” said she “know[s] that America affects her life every day” before sharing her thoughts on Israel.

It’s in the way that a lot of taxpayer money is allocated for funding the military, whether it’s in backing Saudi Arabia or in Palestine. And I bring this up, because you brought up how the power of the people and demonstrating and organizing is very powerful in America…but I see that over the summer there had been like protests and demonstrations in astronomical numbers [on behalf of Palestine] but then just a few days ago they were both allocated to continue backing Israel, which hurts my heart, because it’s an ethnic genocide.

The student then continues to say that it’s just like the genocide that happened in America. She also advocated that the money spent on Israel should instead be spent on expanding the welfare state.

The U.S. House of Representatives passed legislation on September 23 to allocated $1 billion to Israel’s missile defense system, often referred to as the Iron Dome.

“This is about the fact that your voice, your perspective, your experience, your truth cannot be suppressed, and it must be heard,” Harris told the student.

While Harris praised the student, the White House has had to try to assuage criticism and concerns about what she did and did not say.

Shameful. There is truth and their are lies. No one is entitled to their personal truth. This attack on Israel is simply a lie and VPOTUS should have called that out.https://t.co/leLOO5C6Cs #FoxNews

“There is truth and their are lies. No one is entitled to their personal truth. This attack on Israel is simply a lie and VPOTUS should have called that out,” David Friedman, who served as U.S. Ambassador to Israel under President Donald Trump tweeted.

Harris staffers “contacted the influential Democratic Majority for Israel to clean up remarks she made Wednesday [Tuesday],” Politico said. “We were pleased Vice President Harris’s senior staff reached out to us today to confirm what we already knew: Her ‘commitment to Israel’s security is unwavering,’” Mark Mellman, the group’s president said.