The chancellor of the Washington DC Public Schools sent a Thanksgiving email to all parents and staff on Tuesday which included ways to “decolonize” the holiday.

Titled “Sharing My Gratitude,” Chancellor Lewis Ferebee’s (below, left) message reads in part “Thanksgiving is a day that can be difficult for many to celebrate as we reflect on the history of the holiday and the horrors inflicted on our indigenous populations.” 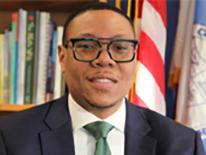 As such, Ferebee’s equity team provided a few links in the message to assist with decolonization efforts, such as giving a land acknowledgement before indulging in turkey, stuffing and cranberry sauce.

There’s also the article “3 Ways to Decolonize Thanksgiving” in which Native American author Alexis Bunten, a PhD in cultural anthropology, claims that she had never learned about how Natives “had already been decimated by disease introduced by European traders by the time of the first Thanksgiving, how they had been stolen and sold as slaves back in Europe, or how their graves were robbed of precious seeds to go with them to the afterlife by starving Pilgrims whose old world seeds would not grow in the new land.”

Bunten’s trio of decolonization methods include “combat[ting] erasure by telling the real story of Thanksgiving around the table,” “re-center[ing] Thanksgiving by serving locally sourced food” and “address[ing] oppression by widening your circle” (meaning, asking someone other than a friend or family member what Thanksgiving “means to them”).

And don’t forget the list of book recommendations for both adults and kids, the latter of which, ironically, features virtually all feel-good stories portraying Native Americans in a positive and glowing manner.

Chancellor Ferebee ends his note by saying “I wish you and your family a joyful start to the holiday season. Happy Thanksgiving.”

Perhaps in next year’s message Ferebee can include a link to the following video, which makes neither a claim of superiority nor guilt, but merely that the actions of European settlers in North America were not unique among men.

MORE: Here’s how colleges should teach and celebrate Thanksgiving