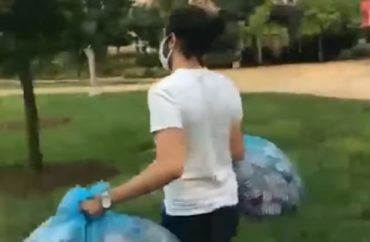 A Washington University student government executive caught on video taking flags from a 9/11 memorial has resigned his position, citing an increased workload.

Fadel Alkilani, the vice president of finance for the student government, said that the departure of staff members made his budgeting and other fiscal responsibility work too difficult.

“It is no longer reasonable for me to shoulder this burden,” Alkilani said, according to Student Life, the campus paper for the St. Louis university. “Last semester I was putting in dozens of hours a week, and that was without these additional commitments, and with the assistance of twice as many business coordinators.”

Alkilani controlled $1 million in student organization funds, even after being sanctioned for destroying a 9/11 flag memorial sponsored by Young America’s Foundation and the campus College Republicans chapter.

Student Life said the destruction of the flags, meant to symbolize lives lost to terrorists on September 11, 2001, “sparked online backlash from right-wing groups.”

University officials required Alkilani to pay $500 in restitution and placed him on “disciplinary probation” for his actions.

“Respondent will be expected to meet with a university faculty or staff member and complete an essay on a topic, which will be determined by my office,” Associate Dean Sheryl Mauricio wrote in a letter describing the punishment. “The purpose of this educational sanction is to encourage meaningful reflection on his actions and their impact on other members of our community.”

YAF said it is good Alkilani is out of power.

“Fadel Alkilani showed no remorse for destroying YAF’s 9/11: Never Forget Project display last year, and the student government chose not to hold him accountable––allowing him to remain in his leadership position controlling student organization finances,” Kara Zupkus told The College Fix on Monday. “Alkilani should have been removed months ago. Regardless, it’s a good day for Washington University when such a divisive, hateful person is no longer in power within student government.”