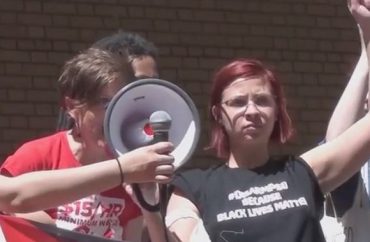 The protest and its die-in, the latter of which took place in the middle of the street and blocked traffic, was staged Tuesday, May 10. The action was organized by “Disarm PSU” — a group still furious over a 2-year-old decision by the board of trustees to create an armed campus police force.

The video’s producers also note on Facebook that some speakers called police rapists, praised Palestine, and called for ending cooperation with immigration enforcement. Watch this video and just be glad you don’t live in Portlandia:

The protest was the latest in a string of actions by Disarm PSU campus activists over the last year. They have also continually disrupted board meetings.

As for university leaders, they have thoroughly explained the rationale behind their decision.

“Portland State is an urban campus that blends with the surrounding city gives us unique challenges,” officials say on the university website. “The campus community needs to know that, on occasion, dangerous offenders who are not affiliated with the university come on campus and commit crimes.”

Aside from being able to use guns, campus police officers also “issue citations, investigate sexual assaults, apply for search warrants, impose mental health holds and involuntary detox, and will receive state public service training and certification. They will also be able to go off campus to follow up on crimes and check in on students who are suspected to be a risk to themselves or others.”

(No wonder these radical students don’t want cops on campus.)

Scott Gallagher, a university spokesman, told The Oregonian that despite the protest, the police force is final; Portland State already has eight armed officers and plans to add four additional armed officers over the next two years, Gallagher said. The university also has nine unarmed campus security officers.

“While we support our students’ right to free speech,” Gallagher told the newspaper, “the decision to create a sworn Portland State University police force was made by the Board of Trustees in 2014 after more than two years of study and debate with students, faculty, staff and the community.”