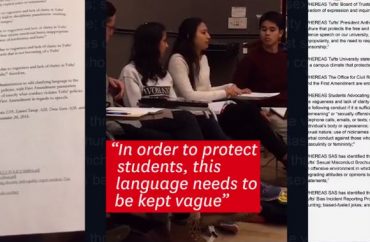 Private universities are not subject to the First Amendment, but many of them make similar promises about how their students are allowed to express themselves without fear of punishment.

Tufts University is making those promises – and not keeping them, according to a new investigation by the Foundation for Individual Rights in Education.

The group started investigating Tufts after its student government rejected a student-authored resolution that would have asked the school to reconcile its free-speech promises with the content of several policies, including the bias policy, which punishes students for “derogatory language” and “negative images”:

TCU Senate urge the administration to add clarifying language to the above identified policies, and all other similar campus policies, with First Amendment parameters and principles, so that we the students are fully aware of exactly what conduct violates Tufts’ policies and simultaneously receive the full protection of the First Amendment in regards to speech. Students have been systematically investigated, interrogated by police, and punished by Tufts for speech the university claims, generally, to permit. What’s more, numerous students told us the campus climate is “toxic” for free inquiry, with a passionate but small and exceptionally like-minded student body attempting to silence “offensive” or disfavored speech — even reporting it to administrators and police, or characterizing it as a literal act of “violence.”

These mutually reinforcing phenomena create a perilous combination for students who want to speak their mind at Tufts: Open disagreement isn’t just “social suicide” — it can get you in serious trouble.

It released a video that features Jake Goldberg, author of the failed resolution and president of Students Advocating for Students, which educates and empowers students to defend free speech and due process on campus. The video also includes footage from the student government meeting where representatives explained why they were afraid of protecting speech.