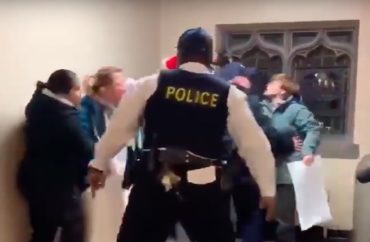 ‘That man in there has violated every single one of us!’

As shown in striking video released by Young America’s Foundation, a talk by Jeff Sessions at Northwestern University last night was crashed by furious protesters who screamed that Sessions had “violated” them and that their lives were on the line.

The campus conservative organization posted on its website that the group of activists “interrupted and protested Young America’s Foundation’s lecture featuring Attorney General Jeff Sessions.” The protesters “screamed anti-ICE chants” and also accused Sessions of being a white supremacist.

Video of the event posted to YAF’s YouTube channel shows campus police struggling with protesters in Northwestern’s Lutkin Hall. One activist repeatedly yells “Don’t touch her!” At one point a young woman loudly declares: “Black and brown lives have never fucking mattered to this university!”

Another declares that the protesters are “not being cute for the…photographers” but rather that they are “fighting for their lives right now.”

At one point a woman in a red jacket attempts to block the camera from recording the event. According to Young America’s Foundation, that individual was Assistant Vice President for Student Affairs Kelly Schaefer.

The Daily Northwestern, meanwhile, reports that some protesters, eager to get into the venue, had resorted to “climbing through open windows and pushing through doors.”

The Daily also reports that an organized counterprotest to Sessions’ appearance on campus took place at the same time as the scuffle in Lutkin. That event, called “Night of Action at Northwestern University,” was formed “to protest [College Republicans’] decision to bring Sessions to campus, as well as his promotion of racist policies.”