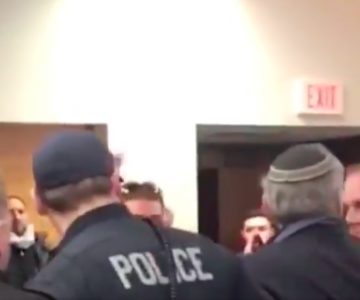 He says he ‘challenged’ Tlaib about her purported antisemitism

Viral video posted to Twitter on Sunday afternoon shows campus police ejecting a Jewish activist and former New York State politician from a Muslims for Peace event at Rutgers University after he publicly accused a Muslim congresswoman of trafficking in antisemitism.

Dov Hikind, a radio host in New York City who served as a representative in the New York State legislature for thirty-five years, posted on his Twitter account video of a tense situation at the 14th Annual Interfaith Prophet Muhammad Conference, held on Sunday at Rutgers.

Congresswoman Rashida Tlaib was among the speakers who appeared at the event. The video posted by Hikind shows a brief but heated confrontation between him and Tlaib, who was on stage at the time.

In the video, Hikind, founder of the group Americans Against Antisemitism, stands up out of his seat while shouting at Tlaib: “What about your antisemitism? What about your blood libel?” Campus police subsequently escort Hikind out of the event room. In his tweet, Hikind claimed that Tlaib “had no answer” to his assertions.

Police just ejected me from an event of @Muslims4Peace at @RutgersU which was a fine event until @RashidaTlaib showed up. I challenged her about her antisemitism and spreading of an anti-Jewish blood libel! She had no answer for me.

They will never silence us!

‘I was there to confront Tlaib for one reason’

Via email, Umar Sheikh, a member of the Board of Directors of Muslims for Peace, shared a statement from the group confirming that “one attendee at the event was escorted out of the conference by authorities during the presentation of Congresswoman Rashida Tlaib.”

“The conference agenda, provided to all attendees, provided for a question and answer segment after the presentation of the Congresswoman, which apparently the attendee did not want to wait for,” the statement said, adding that the group “is supportive of all voices being heard and the Congresswoman was open to answering the question.”

The statement said that campus police had acted of their own accord when removing Hikind from the room:

It is our understanding that given the fact that there were two groups, with opposing viewpoints, that had ongoing protests outside of the conference, the authorities responsible for the safety and security of all conference attendees, including children, had a predetermined protocol for any disruptions to the conference.

Reached for comment via telephone on Monday afternoon, Hikind frankly admitted that he did not wait for the question-and-answer session indicated on the agenda. “I was there to confront Tlaib for one reason,” he said, citing Tlaib’s recent circulation of what Hikind said was a “blood libel” against Jewish people.

A blood libel is historically an antisemitic attack in which Jews are accused of murdering Christian children and using their blood for ritualistic purposes. Hikind was referring to Tlaib’s retweeting of a conspiracy theory that “Israeli settlers” had recently kidnapped and drowned a seven-year-old Palestinian boy. Authorities later concluded the boy’s death had likely been an accident.

“She basically blamed the Jews for the murder of this child which went out on her Twitter account. It’s the kind of blood libel that we’ve had throughout history that’s resulted in pogroms. She blamed Jews for murdering a child. She has never apologized for it,” Hikind told The Fix.

“What she did is a horror. She didn’t have the decency to publicly apologize for what she did. I was there to confront her for that,” he added.

Hikind said he elected to stand up after Tlaib told the audience that “it’s important to speak out.”

“It’s at that point that I spoke out. I decided it was the right moment for me to question her about her anti-Semitism, her most recent egregious behavior of the blood libel against the Jewish people,” he said.

Hikind added that the police “were wonderful” and were “just doing their jobs.”

Rep. Tlaib’s office did not respond to a request for comment on the controversy on Monday afternoon.

The event listing on the Muslims for Peace website said the conference was meant to “give a voice on behalf of those who do not have a voice to speak on their plight and learn to obtain the means to assist others.”

Hikind himself said he enjoyed the event apart from the appearance by Tlaib.

“I sat there for a number of hours listening to the speakers [and] we were very impressed with the things that were being said by Muslims for Peace,” he said. But, he added, “choosing [Tlaib] as a speaker contradicts everything I heard.”