‘When was the first time someone called you the n-word?’

A white candidate for Wisconsin Superintendent of Public Instruction created a controversy when she answered a doctoral candidate’s question meant for black people.

Deborah Kerr, one of two top vote-getters in the recent primary for the post, tweeted an answer to a “viral prompt” by Race Through Education Podcast host Madison Payton, a student at NYU.

According to the Milwaukee Journal Sentinel, Kerr replied that her “lips were bigger than most and that was the reference given to me” to Payton’s question “When was the first time someone called you the n-word?”

Kerr noted she was 16 years-old at the time and that she is white. She said the incident made her realize being different from one another is a “gift.”

Payton was not happy, noting the question was for “Black and brown people who have experienced trauma from whiteness and white supremacy.”

“I’m disappointed that a white person, let alone a candidate for a very important position in education would think that it is appropriate to use her experience in this space made for us,” Payton said. 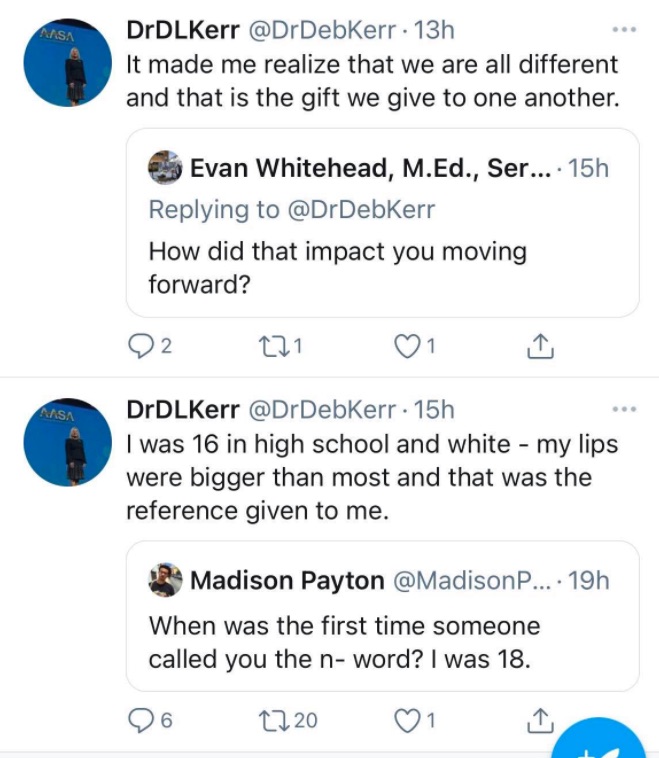 Nijeria Boone, who had Kerr as a superintendent when she attended school, said “You can’t equate someone saying that to you as a white person to the trauma that these Black kids are experiencing hearing the N-word.” Boone noted Kerr ended up blocking her and others on Twitter after they responded to her answers.

“While not intending the post to be interpreted as racist, the post was itself insensitive and so I shut my account down and removed the comment,” Kerr said in a statement. “I do not shy away from conversations about race. In fact, I am very vocal about racism as it exists in its many forms and I intentionally point to it when I see it. I apologize for having posted something that was intended to be a part of the discussion of racism.”

Castro added he hopes Kerr won’t ignore this discussion going forward: “Working in education, you’ve got to be really receptive to criticism and feedback,” he said.

MORE: Study: Whites think being called N-word by blacks is a friendly gesture

MORE: Professor reported for warning students NOT to use the ‘n-word’