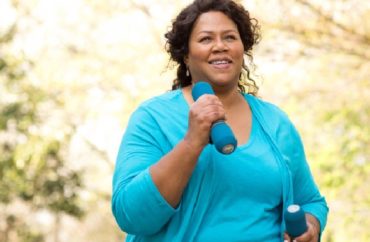 OPINION: History professor at The New School identifies the latest activity that is racist

Exercise has its roots in “white supremacy” according to a history professor at The New School.

Professor Natalia Mehlman-Petrzela has a book coming out in January 2023 called “Fit Nation: The Gains and Pains of America’s Exercise Obsession.”

Because there were racists in the 19th century, the historian was able to find a way to connect exercise to “white supremacy,” which fits well academia’s obsession with finding racism everywhere (see video below).

At first, the historian was glad to read about the promotion of exercise among women, until she found out more about the true motivation of “fitness enthusiasts.”

Then you keep reading, and they’re saying white women should start building up their strength because we need more white babies. They’re writing during an incredible amount of immigration, soon after enslaved people have been emancipated. This is totally part of a white supremacy project. So that was a real ‘holy crap’ moment as a historian, where deep archival research really reveals the contradictions of this moment.

Running too is problematic, according to the history professor. While running “became popular with environmentalists…it’s important to point out that access was never totally equal, if you lived in a neighborhood that didn’t have safe streets or streets that were not well lit.”

“Women were catcalled. People of color were thought to be committing a crime,” she said. “The ‘running is for everybody’ discourse still quite often leaves out the fact that depending on where you live and the body that you live in, it can be a very different kind of experience.”

Of course, since racism existed in the 19th and 18th and 17th century, it is probably possible to link virtually everything to “racism” or “white supremacy.”

Exercise itself, which has existed from the beginning of time, is not actually racist of course. But in academia’s race obsessed world, professors must find a way to turn their academic interests into a fight for wokeness and leftism.

Baseball could be considered racist – there were segregated leagues.

Boats and shipping could be racist – ships, after all, were used to transport slaves.

Dishes and silverware were racist – white slave owners forced their slaves to cook them meals and put them on plates and to polish their utensils.

Accounting is racist – how else did slave owners keep track of how much cotton was picked by their slaves? (The “1619 Project” did claim that double-entry bookkeeping has racist roots).

By Professor Mehlman-Petrzela’s logic, if the encouragement of fitness so that white women will have more babies is racist, than really all aspects related to the pregnancy and delivery of their babies is racist.

Of course, one thing leftists only rarely talk about is the racism behind abortion, which unlike the racist roots of exercise, is real.