A white female teacher in Oklahoma is on paid leave pending an investigation after she allegedly told a black student his “Black King” t-shirt was “racist.”

According to the Atlanta Black Star, the teacher at Heartland Middle School asked 13-year-old Latrell Taft in the midst of a lesson about the saying on his shirt.

Taft claims the teacher told the class that if someone had worn a shirt with “White Queen” on it, that would be branded “racist.” She also said there should be a “White History Month.” The class largely agreed with the teacher that his shirt was racist, Taft added.

In response to the White History Month remark, Taft had replied “Black people don’t have enough recognition and we barely learn about Black people in February at my school.”

The Edmond Public Schools district is about 11 percent black.

MORE: Student is back with ‘All White People Are Racist’ clothing line 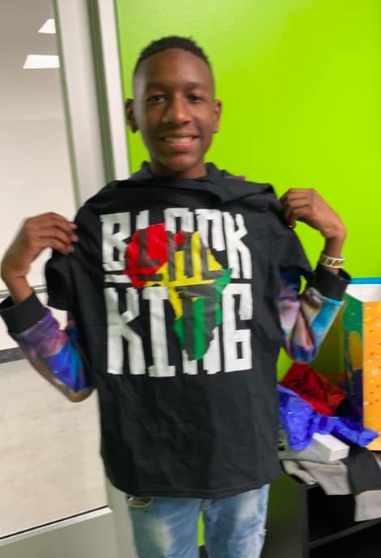 The district later released a statement announcing the incident was under review and sharing that the district is continuing to assess the need for unconscious bias training for staff members.

Susan Parks-Schlepp, director of communications for the district, also shared that the teacher involved has been placed on paid administrative leave pending potential disciplinary action.

“This afternoon, district leadership is meeting with the teacher. A decision on disciplinary action could be taken following this afternoon’s meeting if warranted by the facts and authorized by state law and board policy,” Schlepp said.

Taft said the teacher’s comments won’t deter him from wearing the shirt.

“I am proud of my blackness, and she will never take it away from me,” Taft said. “I am a king because I think I’m a king.”

Parks-Schlepp added “It’s important to note that employees have fundamental rights to ensure fairness when they are the subject of a complaint. Those rights include an option for the teacher to respond to and contest any recommended disciplinary action.”