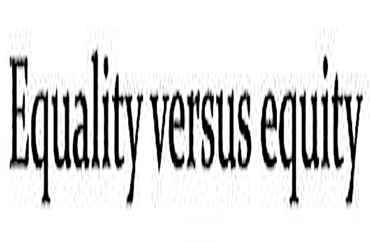 “When did equity become a trigger word?” Education Week wondered recently. Columnist Stephen Sawchuk is genuinely flummoxed by those who question what the modern version of equity entails.

“As someone with many years’ experience writing about schools,” Sawchuk writes, how can, for example, a school board member in Oregon believe that equity is about “trying to force the same set of outcomes for students”?

Well, for starters, as someone who taught in public schools for over 25 years, I can tell you: That’s exactly what part of contemporary equity is.

It may not supposed to be, but it is.

Regular readers of The College Fix and similar outlets have seen many stories about the alleged “disparate” treatment of minority students in school discipline. Modern equity means racially “disproportionate” misbehavior statistics cannot be due to minority students actually misbehaving more; it means teachers and administrators are displaying their white supremacy, implicit bias, and/or lack of “cultural competence,” etc.

If minority students are getting more D’s and F’s in a teacher’s class it can’t be due to their poor study habits, lack of parental support and failure to do assignments; it means — again — teachers and administrators are displaying their white supremacy, implicit bias, lack of “cultural competence,” etc.

Even when it’s not explicitly stated by school administrators (and it rarely is) there’s the “understood” pressure of equity. Over 15 years ago at an inservice, the wife of my district superintendent (who, yes, was employed by the district as some sort of an “advisor”) handed out to each teacher a breakdown of their classes’ grades by race — with the preface that it was “just something to think about.” (This was the same district administration that brought in Glenn Singleton and his “Courageous Conversations” program.)

Interestingly, Sawchuk raises the point about equity measures being “somehow inconsistent with American principles” because equity differs from equality in that the former means students with “lower performance” and/or “greater needs” get more resources. Most Americans value the latter because in a multicultural society equality under the law should be the guiding principle (as many factors contribute to demographic disparities).

Equity proponents focus on the country’s past (and current) racism and discrimination (or, as they frequently put it, “white supremacy”), while opponents point to lack of fathers/family structure and other cultural elements. Those in the latter category wonder about the fundamental fairness of extra “equity” resources: Why should they be shortchanged for doing the right thing?

Sawchuck mentions unequal school funding as an example of an “unfair playing field.” But despite myriad examples of majority-minority districts that have overall greater per-pupil spending than majority-white districts (some much greater), there’s the inherent contradiction between equality and equity: “We need to be equal … but we also need more.”

When progressive-pushed equity measures become the norm, demographic interest groups battle for the “spoils,” and rifts are created among teaching staff and students alike.

During an interesting chat not long ago with my legal field-employed offspring, we wondered: Instead of continuing to play legal and semantical games regarding equity, why not grant minorities, in particular black Americans, certain guarantees like was done with Native Americans? Yes, it’s reparative and likely would not garner much popular support (for a number of reasons), but at least we wouldn’t continue fooling ourselves that modern equity is compatible with the equality for which we’ve historically striven.

MORE: A bachelor’s in diversity: Students to learn U.S. history through lenses of equity, critical theory