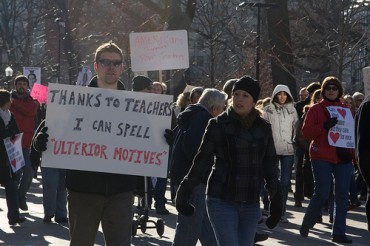 Amidst chants of “the people united will never be defeated” and “CTU! CTU! CTU, we stand with you,” the steps of the Wisconsin state capitol Friday hosted a congregation of picketing teachers and other “working class” activists who sought to show their support for the striking educators of the Chicago Teachers Union and their demands for a salary hike, class-size reductions and other reforms.

Clad in bright red T-shirts and outfitted with various signs, including the ever-popular “Stop the Attack on Wisconsin Families,” the so-called Solidarity Rally was coordinated by the Madison International Socialist Organization, Madison Teachers Inc., the Teaching Assistants’ Association of Madison, and other union affiliates.

Karen Vieth, a teacher at Sennet Middle School in Madison and a speaker at Friday’s rally, took up her Chicago peers’ cause in a speech, claiming that “they ask that we don’t cram more students into overcrowded classrooms.”

Wisconsin teachers also denounced efforts to establish charter and private schools. Daniel Suarez, with Madison’s Teaching Assistants’ Association, said privatizing education takes “control of schools away from parents, teachers, and students.” He added education, and society as a whole, should be “based on human need, not on profit.”

Yet “profit” is what Vieth, Suarez and the other teacher protesters are really after. It’s not about the students, it’s about unions’ bottom line: money and political muscle.

Teachers’ unions—and all public sector unions, for that matter—are part of what some refer to as “The Machine.” Case-in-point: Reason, in a recent video, pointed out that tax dollars fund teachers’ salaries, a part of which is deducted by force to pay mandatory union dues. Unions proceed to promote increased teacher pay, a plank taken up in the platforms of politicians. These politicians are then supported financially by unions.

Once the politicians succeed in increasing teacher salary and the number of teachers, the unions grow larger and wealthier, incentivizing the continuation of their current course of action. This profligate cycle continues ad infinitum – all at the taxpayers’ expense. It should be of no surprise that teachers’ unions are among the largest contributors to political campaigns. The National Education Association alone spent $40 million on the 2010 election cycle.

Using children’s welfare as their rallying cry, teachers unions such as those in Madison and Chicago also often call for lawmakers to “fully fund education.”

This implies that, for starters, it is possible for a person or group of people to know the optimal amount of money to spend to “fully fund” a bureaucratic instruction apparatus (hint: for the unions, any amount will never be high enough), and as a corollary, that the public education system is currently underfunded. It is difficult to substantiate that claim, however, when a study by the Mackinac Center for Public Policy estimated that on average, twice as many dollars are spent per pupil in public schools than in private.

Would privatization of education really be dangerous? Institutions that compete against each other on the market, unlike government bureaucracies, must constantly satiate consumer demand. Jeffrey Tucker, an adjunct scholar with the Mackinac Center, writes of government bureaucracies: “They face no competition, have no access to a feedback mechanism of profit and loss […] They are not owners but rather outsiders to the market process, blind to the needs of consumers.”

Suarez, the Madison teaching assistant, has it backward; the motive of profit is precisely what drives entrepreneurs to create better goods and services that respond to human need.

Is education fundamentally different from any other service? Political commentator Lew Rockwell does not think so, and prognosticates that in a world of privatized education, “educational alternatives would be unlimited.”

Indeed, markets would emerge for specialized schools, private tutoring would increase, and there would be nothing wasted on union dues. Students would get the instruction that best fits their needs, without anything superfluous or unnecessary. Furthermore, control of education would truly be in the hands of only parents, teachers, and students. Isn’t that what the teachers in Madison and Chicago want?

Fix Contributor Joseph Diedrich is a student at the University of Wisconsin-Madison.