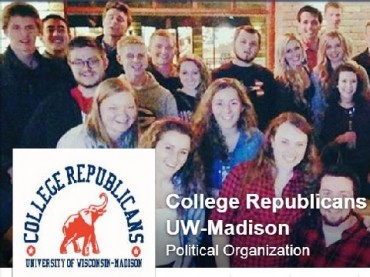 A plea by College Republicans to keep an open mind about Gov. Walker and his budget plan elicits vulgar assault against them

“Listen you c*nts, don’t email me this political bullshit.”

“You must have a big hairy pair of brass balls and a marginally functional brain to  be recruiting for Republicans on the UW campus right now.”

Those are just a few of the vulgar, hate-filled responses the College Republicans at the University of Wisconsin-Madison received after sending a campuswide e-mail Monday asking students and scholars to keep an open mind about Gov. Scott Walker’s budget proposal.

Other responses included “f*ck you and the horse you rode in on” and “I get more reliable information from a bathroom wall on campus.” Additional replies accused Gov. Walker of wanting to eliminate intelligent people from Wisconsin, and suggested Republicans are “ignorant and hateful” people.

College Republicans sent out their message with the intent of engaging their peers across campus, and paid a $100 fee to send the blast e-mail, College Republicans chair Courtney Mullen told The College Fix. In total, there were roughly 200 responses, with almost all of them being incredibly negative, she said.

“Our goal wasn’t to offend people with this mass email,” Mullen told The College Fix. “Our purpose really was to open up dialogue around campus and show that there are other opinions than just the chancellor’s on this budget proposal. I’m disappointed that so many on this campus have shut down that opportunity.”

Some of the responses have been posted on the group’s Facebook page.

“Here are a few examples of the hateful and ignorant responses we received after sending out an all campus email yesterday about Governor Walker’s proposed reforms,” the group stated on their Facebook page. “Doesn’t really sound like the Wisconsin Idea to us. ‪#‎BadgersForTheBudget”

In a statement to The College Fix, Ryan Karow, treasurer of College Republicans, said that “so basically when we sent out the email, we knew that we would get a lot of backlash but we didn’t think the responses would escalate to such profanity and deep hatred.”

“Liberals always preach about how they are the party of acceptance and equality but this obviously isn’t the case,” he added. “They are so quick to defend the ‘Wisconsin Idea,’ but in reality don’t live it out. In the end, regardless of political views we are all Badgers, and there is no place [for] such actions.”

The campuswide e-mail was titled “A Stronger Future for the UW,” a copy of which was obtained by The College Fix. It reads:

You have heard a lot about Governor Scott Walker’s proposal regarding the UW-System. His proposal will be talked about in classrooms, dorm rooms and throughout the university. Already the dialogue has unfortunately devolved into name-calling and mistruths.

At this point the bill is in its beginning stages. What is being proposed will not be exactly what is passed. What does this mean to you? This means that the door for dialogue and engagement is wide open. Before you attend a protest or sign a petition, come to your own conclusion.

Proposals like these have worked elsewhere. In 2005, Virginia passed a similar bill to what Walker is proposing. It granted more autonomy to the state system as long as the system met certain educational goals and requirements laid out by the legislature. More autonomy coupled with more accountability. Like Walkers proposal, the passage of the bill was also coupled with cuts to their state system. In fact, the Virginia state system faced a 27% cut, in comparison with the 13% that the UW-System is facing.

The cuts being proposed are significant. This is not something that is debatable. But remember, these cuts are coming on the heels of the UW-System hiding $1 billion in a slush fund while lobbying for tuition increases. This led to the Governor giving this money back to the students in the form of a tuition freeze. The autonomy plan is also something very different and will take work to put the UW-System in the best position for success now and in the future.

This conversation will continue throughout the next couple of months. Engage in constructive dialogue. Come to your own conclusions. It will be a challenge. It will take work. But together we can use this to propel our school to new heights.

The vitriolic responses came just a few days after protesters held a rally on UW-Madison’s campus against Walker and his budget proposal, a demonstration during which participants cheered for the end of democracy and suggested the budget plan would decimate the campus’ quality and reputation. The rally was planned in part through using departmental list-servs.

The emails embedded in this article were written by students, based on the fact that their names are listed in the campus directory under student e-mails.