Female symbol is ‘trailblazing for some, represents the erasure of others’

Any guesses how much Mount Holyoke College spent on designing a new logo that’s not woke enough for its post-gender student body?

The Massachusetts women’s college has been admitting men who identify as women for the past four years, and it didn’t waste time bending to their demands for fewer reminders that Mount Holyoke is intended for women.

The latest reminder that the college is women in name only is its groveling before “a group of students” chosen to evaluate the proposed redesign of its logo.

In an undated announcement noted by Inside Higher Ed Thursday, and cached by Google late Tuesday, the private college’s top marketing official apologized for signaling too strongly that Mount Holyoke is for women.

Vice President Charles Greene, who uses male pronouns and has been on the job less than a year, told the community the college was working with an outside design firm to create a new “bold, modern” logo that would “differentiate Mount Holyoke from other colleges”:

More importantly, we asked the design firm to develop a visual identity that could speak to the College’s identity as a gender-diverse women’s college.

Guided by initial discussions with trustees, graduates, faculty, staff, alumnae and students, our partners also thought it important to express the important role that women’s colleges have played in exploring issues of gender, particularly with regard to populations that have typically been marginalized in society.

That group of students chosen to evaluate the proposed logo? They nixed “the use of the Venus symbol as an option for the brand identity and logo, as proposed by the consultants” (note the logo when rotated 90 degrees counterclockwise):

It is now evident to us that this symbol has a long history of exclusion connected to movements that, while trailblazing for some groups, represents the erasure of others.

We have thus determined that the College cannot move forward with a word mark that references this symbol as we rethink how we will distinguish Mount Holyoke College. While it is always disappointing to realize that our creative work has not achieved its goals, it is deeply upsetting to realize that the work is seen as offensive and damaging.

Greene could have left it at that, but couldn’t stop himself from further individual and collective self-flagellation for being so hurtful to the college’s non-female population.

The message had started “We are listening,” but explained near the bottom that maybe, well, they hadn’t been listening earlier:

At one point during Thursday’s presentation to students, it was suggested that the people in charge of rebranding had heard the students in earlier presentations, but that we had not been listening. That is criticism that I take to heart. Our team is going to take a step back in the design process, both to more fully engage the community in a conversation about what it means to be a gender-diverse women’s college and to re-envision the ways in which we solicit feedback and participation in the design process.

Mount Holyoke is now offering to open the design process to an even less manageable committee framework that will likely produce a logo along the lines of the “Human Being” by the fictional Greendale Community College (below) in the TV sitcom Community. 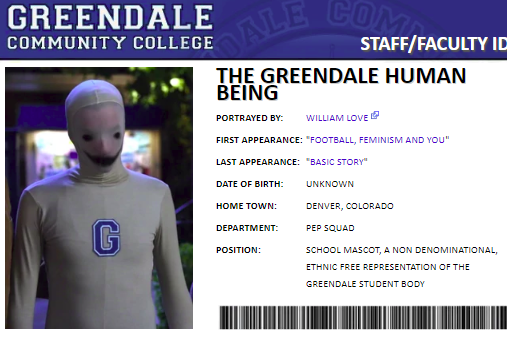 Greene said the college will create a “formal student design advisory board,” offering positions to the student volunteers who rejected the quasi-Venus design “as well as others who might be interested.” He also gave students his personal email to share their feedback with him.

This experience has convinced the college that it can’t “move forward with a word mark that references this [female] symbol as we rethink how we will distinguish Mount Holyoke College,” he wrote:

As people who work and study at a women’s college, we are all deeply committed to gender equity and justice. Our commitment to being a trans-inclusive space is critically important to who we are as a campus community. We recognize that Mount Holyoke is evolving and has much work to do in demonstrating its support for the diversity of genders and perspectives represented by the students, faculty, staff, and alumnae of the institution.