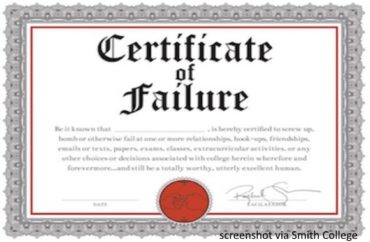 ‘Distraught and inconsolable when they score less than an A-minus’

Smith College, a top-ranked liberal arts school for women, is teaching them that life comes with disappointment, rejection, stumbling blocks — and it’s OK to experience such hurdles and learn from them.

The Massachusetts-based elite university, which costs about $67,000 annually in tuition, fees and other expenses, has rolled out a new program called “Failing Well.” And while the name implies it’s helping the young women cope with life’s really big screw ups, the fine print illustrates the initiative is actually more about helping students grapple with a thing called life.

“We’re not talking about flunking out of pre-med or getting kicked out of college,” Rachel Simmons, the program’s facilitator, told The New York Times. “We’re talking about students showing up in residential life offices distraught and inconsolable when they score less than an A-minus. Ending up in the counseling center after being rejected from a club. Students who are unable to ask for help when they need it, or so fearful of failing that they will avoid taking risks at all.”

The effort was recently featured in a lengthy New York Times article that noted Smith is just the latest in a parade of elite universities to offer students programs to help them cope with disappointment and rejection.

“Nearly perfect on paper, with résumés packed full of extracurricular activities, they seemed increasingly unable to cope with basic setbacks that come with college life: not getting a room assignment they wanted, getting wait-listed for a class or being rejected by clubs,” the Times reports.

The verdict on why so many of America’s high-achievers cannot handle a little adversity is mixed, but the Times cites “a complicated interplay of child-rearing and culture: years of helicopter-parenting and micromanaging by anxious parents.”

“This is the generation that everyone gets a trophy,” said Rebecca Shaw, Smith’s director of residence life, told the Times.

And so at Smith, participants in the Failing Well program even get a certificate. It states they “are hereby authorized to screw up, bomb or fail at one or more relationships, hook-ups, friendships, emails or texts, papers, exams, classes, extracurricular activities, or any other choices or decisions associated with college herein wherefore and forevermore … and still a totally worthy, utterly excellent human.”

Similar to some campus safe spaces, a few of the Smith program’s initiatives include making ice-cream sundaes while playing “Stress Olympics Bingo” and spending some time petting a wellness dog, according to its website.

Additional “Failing Well” workshops teach the women that while they get replies to their texts right away, that doesn’t mean a potential employer is going to get right back to them on that resume they just sent in. Another explains that pics on Instagram do not always convey real life. Tips on how to stop overthinking things and the trouble with striving for perfection are also presented.

“When you can fail well, your self-worth doesn’t ride on your success,” the program’s website states. “You know that you are enough as you are, no matter what—and don’t have to lose your sense of self when things don’t work out.”